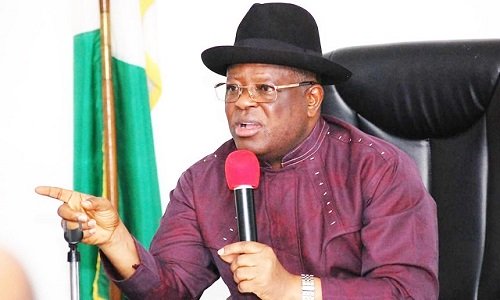 The governor said he could no longer guarantee their safety.

The governor announced the “banning for life” of The Sun and Vanguard correspondents Chijioke Agwu and Peter Okutu.

Umahi barred them from entering the Government House or any government facility.

Civil society groups and the Nigeria Union Journalists (NUJ) slammed the “power-drunk” governor for the action, reminding him that he will not remain in power forever.

Besides, they noted that journalists have a constitutional mandate and cannot be “barred” from doing their work, adding that Umahi has several avenues to seek redress for any report he considers to be false.

Umahi, who is synonymous with controversy, including recently saying that he belonged to two political parties at the same time, made the declaration in a broadcast aired on the state’s stations.

He said he was displeased with the NUJ leadership for failing to discipline their members.

Umahi had last Saturday ordered Agwu’s arrest over a report he did on the Lassa fever outbreak in the state.

Three days later, Okutu was arrested on the orders of Ohaukwu council chairman, Mr Clement Odah, over a report he did on the alleged military invasion of Umuogodoakpu-Ngbo community in the council area.

Both Journalists were later released.

Umahi, who said he could not guarantee the safety of journalists in the state, claimed that the people were angry with them and might attack them if they continue to cause panic in the state.

Umahi said: “If you think you have the pen, we have the koboko (a whip for flogging cows).”

The NUJ, International Press Centre (IPC), the Socio-Economic Rights and Accountability Project (SERAP), the Indigenous People of Biafra (IPOB) and a rights group, the Human Rights Defenders of Nigeria (HURIDE), all lashed Umahi for the “draconian” and “authoritarian” decision.

IPC, in a statement by its Executive Director, Lanre Arogundade, said anybody who feels aggrieved about a report should either exercise the right of reply or seek legal redress and not embark on extra-judicial self-help.

It reminded the state government that such attacks on journalists over the performance of their legitimate duty are antithetical to democratic norms and values.

NUJ described the governor’s action as a deliberate plot to destroy journalism in the state.

Its National Secretary, Shuaibu Usman Leman, described the ban as a joke taken too far.

“The NUJ National Secretariat condemns the continuous desperate action of Governor Umahi to destroy journalists and journalism in his state.

“The most recent development in which Governor Umahi was instigating attacks against journalists in the state is frightening to the Union as it signals clearly that such attacks on the media are not going to abate any soon.

“We regret to note that Governor Umahi is ingloriously attaining notoriety in his continuous harassment, detentions and insult on journalists who dare to report what he feels are against the interest of his government,” NUJ said.

The Union noted that as professionals whose responsibility is to monitor governance and hold the government accountable to the masses, journalists now live in perpetual fear of being arrested by security operatives or attacked by faceless assailants without any just cause in Ebonyi.

“The NUJ has repeatedly cautioned against such acts of impunity and stressed that it is worth noting that press freedom is key to achieving credible democracy.

“This freedom includes the right to seek and receive information from all available sources to enable formulation of proper opinions to whomsoever one desires and to do so through whichever means it is feasible to communicate.

“In the light of these unabated attacks and intimidation of journalists, we call once more on Governor Umahi to tread with caution because the Union will hold him personally responsible for any untoward action on journalists in Ebonyi State.

“It should be noted that neither the Governor nor any government official can determine media content or stop journalists from holding government accountable.

“The Governor may wish to know also that both the Union and respective media organisations have their own procedures of disciplining journalists who step out of bounds but certainly we cannot keep quiet in the face of this brazen attempt to muzzle press freedom which is a critical ingredient for democratic governance,” NUJ said.

The proscribed Indigenous People of Biafra (IPOB), in a statement by its spokesman Emma Powerful, said the journalists’ only crime is exposing the truth.

The group said: “The attention of the great family of the worldwide has been drawn to the incessant harassment, humiliation and arrest of innocent journalists in Ebonyi State since the beginning of this year 2020 by David Umahi.

“Umahi has not stopped harassing and giving threatening messages to journalists in Ebonyi State over their insistence in exposing through their factual reports, the ongoing genocides and unprovoked attacks against hapless Ebonyi people by Fulani herdsmen, terrorists, and security operatives in some instances.

“Governor Umahi and his foot soldiers in Abakiliki Government House have never hidden their sympathy for the cabals behind the mass atrocities in Biafraland, including Ebonyi State just because of his selfish political ambition.

“Under Governor Umahi’s watch in Ebonyi State, journalists who believe in reporting truths are no longer safe.”

Also yesterday, the Human Rights Defenders of Nigeria (HURIDE), Ebonyi chapter, berated the state government over the incessant arrest and persecution of journalists in the state.

Its chairman, Comrade Sampson Oko Nweke, recounted a number of cases involving the abuse of journalists’ rights in the state.

“The incessant persecution of journalists in Ebonyi has become so disturbingly worrisome and HURIDE has risen in that light to say enough is enough.

Umahi, in the broadcast, said accused the journalists of reporting falsehood.