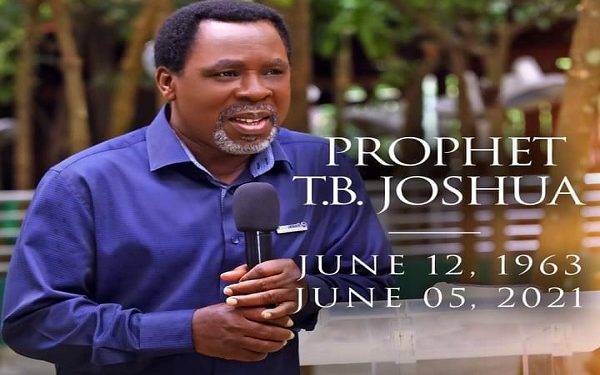 The rift between the family of the late founder of the Synagogue Church of All Nations, Prophet Temitope Joshua, and a disciple of the late prophet is unabated over the running of the church

The leadership and succession crises at the Synagogue Church of All Nations may not be over as a member of the Board of Trustees, Joseph David, has raised the alarm over alleged threats to his life and those of other leaders of the ministry.

David, who has gone into hiding with other disciples of the late founder of the church, Prophet Temitope Joshua, aka TB Joshua, claimed that the family of the founder was using law enforcement agents to hunt them.

He said this was because of their perceived closeness to the late cleric and supposed knowledge of important details of the church not known to the family.

The Delta State indigene, who spoke to our correspondent from his hideout, alleged that the wife of the founder, Evelyn Joshua, was making spirited attempts to consolidate power around her, adding that influential followers of TB Joshua had been chased away, including foreigners.

He said, “The ministry had disciples, who handled the operation, administration and spiritual affairs of the church. Among them were five prophets, who were always with Prophet TB Joshua.

“The prophet’s wife was never active in the administration of the church. She only functioned ceremoniously, maybe to receive awards for him.

“Before the prophet passed on, he was interviewed by a newspaper, where he answered the question of succession. He said the church is not a family thing, and that was why his wife was not always seen with him.

“Around the period he granted the interview, he had removed her from being a trustee of the church. But she did not know she had been removed until he died.”

David said after TB Joshua’s death, the church had two trustees left – the cleric’s daughter, Promise Joshua, and himself.

He noted that trouble started during a meeting to fill the space left by the late cleric, who was the third trustee of the church.

The Yaba College of Technology graduate said two family members – the prophet’s first daughter and his wife – were suggested by a group, adding that he kicked against it to avoid being easily overrun and removed by the family members.

The 52-year-old said he suggested that if the duo would join, then more non-family members should be added to make for balance of power, an idea that was rejected by the family, as the meeting ended without a resolution.

The evangelist said from that point, there was mutual suspicion between the family and the group of disciples led by him.

He said the suspicion was fuelled by the fear of the family that they were in possession of things that the family did not know about.

“Actually, immediately the man of God passed on, the wife started investigating us and our accounts. We don’t take salaries, and we are not exposed to any issue of money.

“But due to suspicion, she took over the administration of the ministry. All the workers started reporting to her.

“For the 27 years that I was in that ministry, she never handled any matter of administration. But she started making people turn their backs on the disciples, saying we are thieves and robbers. As a result, church workers started refusing instructions.

“Our movement was restricted; our personal freedom was infringed on. We could not shout because we thought this was a family issue and we could bear it,” he added.

David said a man was later asked to mediate between the disciples and the family, adding that the intervention did not work out.

He said his group later decided to concede to the family and allow TB Joshua’s wife take over the running of the church.

The cleric said the disciples were, however, shocked when he reached out to the mediator and they were told that the situation had reached a “gunpowder status.”

“He said for us to avoid the disaster that was coming, all of us as disciples must come together and sign an undertaking to declare Mrs Evelyn Joshua as the new GO of the church and we must sign an undertaking to be of good behaviour. And we should forward all that to him and maybe he would ‘unwalk’ the situation to avoid the trouble that was coming. We saw this as a threat, and we did not know how to respond to his message,” he added.

David noted that the matter reached a climax on September 9 when the family allegedly invited some church members and declared Evelyn as the chairman of the board of trustees and general overseer after obtaining a court order.

Simultaneously, he said security agents went to the Prayer Mountain and dragged out some of the disciples after taking their phones, adding that some workers in the church were also taken to the gallery.

He said, “That evening, all the Nigerian evangelists of TB Joshua, some of whom had stayed with the prophet for 28 to 29 years, the least is 20 years, were sent out.

“But before then, their second daughter, Promise, came with letters from the EFCC and distributed to them before they left.

“Most of the prophets, both Nigerian and foreign, she accused them of theft, fraud and money laundering. After she removed the Nigerians, she threatened the foreign ones that they should go back to their countries. Madam said she did not want any discipleship again.”

The evangelist recalled that before the events of that day, Promise had written to the Nigeria Immigration Service to demand that the residency status of the foreigners be reviewed because their services were no longer needed.

He said when he was informed about the call, he went to Abuja to stop the process because the foreigners were still useful.

According to him, the EFCC had since launched a search for him and others, saying their lives were under threat.

He said, “As we are talking now, we are hiding in a hotel. The EFCC came and we were warned that they were looking for us and we should stay in our rooms. Unfortunately, one of our sisters walked into them and they took her away, despite the fact that we had a restraining order.

“The question is, ‘Why is this woman using the arms of the law to intimidate innocent people?’ The charges at the EFCC against us are completely baseless because we are not in the position to launder money or steal; cash does not go through us. Those who work in the accounts have explained the procedure to her, but she is not listening.

“Now, she has gained control over everything and she is still chasing us. We have tried to sympathise with the family, but we also want the world to hear our side of the story.”

Our correspondent learnt that aside from the alleged stealing and money laundering charges, the EFCC was also looking into allegations of misappropriation of the burial funds of TB Joshua, in which the disciples were implicated.

TB Joshua’s daughter, Promise, said the allegations against the family were unfounded, adding that David and others were only trying to give the church a bad name because their atrocities were exposed.

The 24-year-old explained that the family saw CCTV footage of some persons moving money from the church, claiming that some of the drivers involved in the act had made confessional statements indicting the disciples.

Promise also denied that the family was chasing away those who worked with her father. She said they were only asked to leave pending when the church would resume.

She said, “Everything that happened here was recorded and at the right time, depending on how everything goes, it will be put out for the public to see.

“The constitution of the church was followed to the latter and that was how my mum became a trustee. The day it happened, concerned members of the church appealed to the Corporate Affairs Commission and everything was done legally.

“From the beginning of the ministry, there have always been three trustees. The second time my dad made a change, the board consisted of my dad, mum and my dad’s nephew, Hassan.

“Last year, my dad wanted to put me on the board. His nephew, who used to go to court for him (over the church building collapse), left the church. That was how Joseph (David) was brought in. He did not even know he was a trustee until my dad passed on.

“The only reason my dad made him a trustee was for him to attend the court sessions. My dad would not want my mum to be going to court for him. Joseph was the one that was following Hassan, who left last year.”

On the case with the EFCC, Promise said after her father’s death, a committee was created.

She explained that during the period, the family got reports of heavy movements of cash.

“Even the drivers they were using to move the money were the ones reporting these things. There is also a video where they were caught moving the money. The church lawyers then advised that we should report to the authorities and that was how they were invited.

“The foreigners, who were called to carry the money without knowing what it was, went to the EFCC and were released after they were cleared to go back to their countries with the intention of coming back in about a month. They were not deported; they are coming back.

“These people talking are those I believe are guilty; all the other ones went to the EFCC and returned after they were interviewed. All they had to do was to explain what happened because there is video evidence. I don’t know why they are running; if you are not guilty, go and explain yourself.”

Asked why the foreigners were reported to the authorities, Promise said since the funeral of the late prophet, there had not been any activity in the church.

Promise said the church workers confessed the alleged atrocities of the disciples, adding that the departure of the leaders was a relief to many who had suffered under their yoke.

She slammed David for saying her mother was not trusted enough by the father to carry on with the ministry.

“My dad had always put his family as trustees of the church. I am not surprised; this is expected. The church will soon resume; these ones are the bad eggs,” she added.

A spokesperson for the EFCC, Wilson Uwajaren, confirmed that the case was being handled by the Lagos office of the agency.

Asked about the restraining order, he promised to find out and get back to our correspondent.

He had yet to do so as of press time