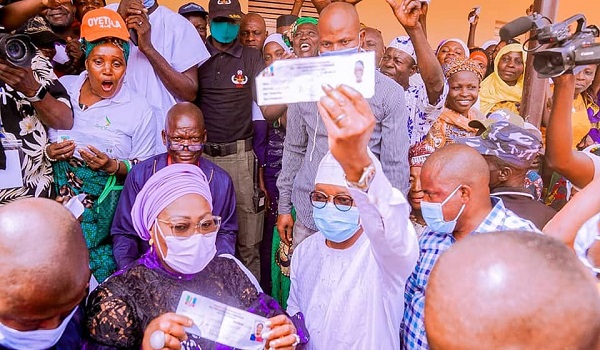 Osun Governor Adegboyega Oyetola has won the All Progressives Congress (APC) ticket to seek a second term in office.

Adeoti, who is backed by former Minister of Interior Rauf Aregbesola scored 12,921 votes to emerge runner-up while Lasun garnered 460 votes.

Oyetola got 15,034 vote at his Boripe local government area against Lasun who scored nil and Adeoti with five votes.
At Iwo Local Government Area where Adeoti hails from, Oyetola garnered 9,432, Lasun polled 1 and Adeoti got 2,543.

Aregbesola, who was absent at his ward, also lost his Ilesha East Local Government Area to Oyetola.

The anointed aspirant of the Minister Adeoti got 483 votes in the council.

Lasun lost his Local Government Area, Irepodun to Oyetola. He got 214 votes against 7,928 of Oyetola while Adeoti polled 732.

After the Returning officers from all the local government areas announced the result accepted by the committee, Oyetola was declared the winner of the election.

The party chairman, Prince Gboyega Famodun called for reconciliation among the gladiators that jostle for the ticket.

Reacting to his victory at Government House, Oyetola commended the members for peaceful conducts during the primary.

He said: “Our great party has spoken as a beacon of democracy and strong and united channel of development. With the outcome of today’s contest, we have jointly made a resolve to continue to redefine governance and re-entrench sustainable democracy.

“Today’s victory is made possible by the members of our great party who gave us another opportunity to face the people of Osun to seek re-election. The outcome of this primary election is victory for our party and members who have spoken loudly through their votes.

“It is victory for our people who trooped out in large number during our strategic tour of the State to inform them of our intention to seek a second term.

“It is a restatement of their confidence in our Development Agenda which hope delivered in 2018 and performance sealed in 2022. It is evidence of their belief in sustainable development which we brought into governance and preached every inch of the way.

“I thank you all our party members for your constant support, and especially for speaking eloquently today with your massive votes in favour of our administration’s restoration and consolidation agenda.

“With this primary election now concluded, I invite us all to rededicate ourselves and the party to delivering an overwhelming victory at the gubernatorial polls holding on Saturday, 16th July, 2022.”

He added: “For me, we are all winners. I, therefore, extend my hand of fellowship to the other two aspirants to join me as we prepare for the July election. We are all brothers. Let’s join hands to build the Osun of our dream.

‘Let us close ranks and eschew bitterness in whatever form. Therefore, may I use this opportunity to also ask all our aggrieved members to have a rethink and join hands with us to further strengthen our party and deliver outstanding results at the gubernatorial poll.”