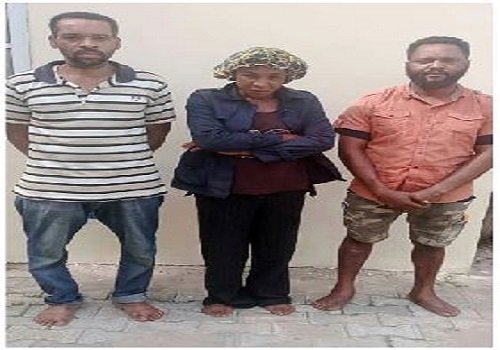 …Suspect: I did it because I was in debt

A self-proclaimed pastor resident in Maraba, Nasarawa State has been arrested for arranging his own abduction in order to extort money from his wealthy family. Forty-seven-year-old Richard Onyekachukwu said he resorted to playing pranks because his younger brother and other family members were not willing to offer him financial assistance in spite of their healthy financial conditions.

Others arrested for conspiring with Onyekachukwu to commit the offence include his wife Mary and his friend, 39-year-old Enoch Frank Nwaolisha.

According to a police source, on June 16, one Mr. Prosper, Onyekachukwu’s wealthy younger brother, reported to the Inspector General of Police (IGP) Usman Alkali Baba that his elder brother named Richard (Onyekachukwu) had been kidnapped and a line of conversation had been opened with his abductors who were asking for a ransom.

The source further disclosed that the IGP immediately directed the Commander of the FIB Intelligence Response Team (FIB-IRT), Abba Kyari, a Deputy Commissioner of Police (DCP) to investigate the matter, ensure the safe return of Onyekachukwu and fish out the culprits.

The IRT operatives swung into action by first visiting the house of the victim where they met his wife but were shocked that she looked unperturbed. And when the operatives introduced themselves as police officers investigating a case of armed robbery against her husband, she shouted that her husband was not an armed robber but only travelled to Taraba State on a business trip.

She told the police officers that although members of her husband’s family thought that he had been in captivity for three weeks, she last saw him about a week earlier.

On the basis of her claims, she was arrested and taken to the police station for interrogation, following which she opened up that it was a case of self-kidnap and the whole idea was from her husband.

Following a clue from Mary that her husband was due to visit the house on June 18, the police laid an ambush and picked him up on the said date.

In his confession, Onyekachukwu, who described himself as a pastor and a contractor from Idemili South LGA, said he decided to organise his own kidnap in order to generate money with which he could solve a pressing financial problem.

He said: “I had a big church, Resurrection Power Church, but its roof was blown away by storm.  I then took some loans to assist the businesses with which I was supporting the ministry and it was about N600,000.

Unfortunately, in the process, I had financial challenges and paying the loan became difficult. I made some losses in my poultry business and COVID-19 did not help matters. The banks were after me and I didn’t know what to do.

“It wasn’t easy; that was why the thoughts came to me. I don’t know why I decided to use that strategy.

“I called my friend Enoch and shared my thoughts with him. Enoch is also a pastor. Initially, he did not accept, but after sometime, he agreed. I told him that even it was a million or N500,000, I would be satisfied.

“Sometime in May, I travelled home to drop the corpse of my deceased mother at the mortuary. After that, I travelled to Nkpor, close to my village, to see if I could get some contracts.

“I was supposed to come back after a week. I called my wife and brothers about my mission at the village. There was three days delay and my wife was panicking because my phones were off. She called my brothers that I am missing.

“When I came back, I sneaked into the compound, dropped my bag and went to the mountain to pray. I called Enoch that we had an opportunity. He then called and told them that I had been kidnapped.

“I used to come back home, but most times I would sleep in my friend’s place. I told my wife after a week. She started suspecting my movements and I told her the things on the ground and that I didn’t know what to do. I needed to get money from Prosper before the bank people would come to embarrass us.

“I am the second son of my parents, and as an elder, I am expected to play a major role in my mother’s burial. We had a meeting and fixed a date and everyone was running around to see how to raise money to contribute.”

On why he requested that his brother, Prosper, must bring the ransom personally, Richard said: “I have no particular reason to request that my brother, Prosper, should bring the money. I never even thought of that as an issue. This is something I thought would just end within the family. My plan was to inform him after some time.

“On the ransom, I demanded N10 million and they bargained to N5 million, and finally, they brought N2 million. We were still waiting to hear from him when police arrested me at home.

“I am not happy. It is a regrettable action. I took it as a family issue I did not know it would get to this extent. I simply tell him that the reason is that if I had asked him for money to settle my debt, he would not do it. I am close to my brother, so I expected that he would bring the money to save my life.”

Mary, in her own statement, who described herself as a petty trader, said her husband told her that he would be embarking on a business trip on May 20.

“After some days, we could not reach him again. He did not come back the day he said he would return. I called his brothers and explained to them and they said I should relax, that he would come. It took about three days before someone called that my husband had been kidnapped and they were demanding N10 million.

“After a week, he came back and I was happy that he had been released, but he told me to shut up, that he would explain. He then asked me if I had plans to pay up our debts.

“He said since everyone believed that he had been kidnapped, I should not say anything till money was paid. He told me that I had started demonstrating my stubbornness when a woman was supposed to be submissive to her husband no matter the case.

“I was both confused and scared. The night they came to arrest me, I called the uncle and raised the alarm. The next day, they arrested me.

I met him as a pastor and I was taught to be submissive. I was just being submissive. It is not about love but obeying the word of God. I don’t have any word to justify myself. I am finding it difficult to forgive myself.

In his own confession, Enoch, a native of Awgu, Enugu State, said: “I am the founder of Christ Resurrection Power, Gospel Church of All Nations. I have no other job except evangelism. I started the church two years before the COVID-19 shutdown.

“My members dispersed and I was not able to raise money to pay rent so I shut down the church. Reverend Richard (Onyekachukwu) is my neighbour and brother in the Lord. He came to me and told me about his money challenge.

“He is owing some microfinance banks, the landlord was at his neck and he needed to contribute money for his mother’s burial. He does not have money to contribute as an elder brother.

“He said that he needed my assistance. I asked in what area and he said that he wanted to have himself kidnapped. He did not have anywhere to get the money from. His brothers do not like to give him money. He wanted to use this pattern to get money from his brother so I agreed to help him.

“He wrote a script and gave it to me, which I acted properly, including pretending to beat him up. We normally went close to the mountain and called them from there.

“We didn’t have any sharing formula until the money would come. I wanted to use it to go down to the east for evangelism.

“To survive, I used to go for outreach programmes and people will sow seeds and give offerings.

I knew that it was wrong when we got to the police station. The Bible says that deceit is a sin. I don’t know which devil entered my mind.

“I got a calling as far back as 2002 and I served under a church till 2015 when I was officially released. We opened an outreach but the church was officially opened in 2003.