Youths protest rumoured plan by Saraki, others to rejoin PDP 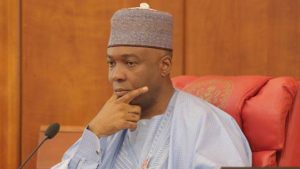 Some youths in the Kwara State chapter of the Peoples Democratic Party on Monday protested against the rumoured plan by the Senate President, Dr Bukola Saraki; his former special adviser on Special Duties and Parliamentary Affairs, Alhaji Moshood Mustapha (popularly known as MM); and other associates of the Senate President to defect from the All Progressives Congress to the PDP.

The youths, on the sidelines of a media briefing by a PDP group, Face of Change, displayed placards that expressed their opposition to the rumoured defection.

Some of the placards read: ‘No to Bukola Saraki and cronies in the PDP,’ ‘MM defection is a liability,’ ‘PDP exco, shine your eyes,’ and ‘PDP gov ticket is not for sale.’

The state Coordinator, Face of Change, Alhaja Kubrat Abdullateef, however, said in an interview with journalists in Ilorin, the Kwara State capital, that the protesters were only expressing their personal views, adding that they were not part of the conference.

Abdullateef lamented the action of some members of the party, which she said, bordered on anti-party activities.

She said, “With the spate of incidents over the last couple of weeks, it seems the party is apathetic to anti-party (activities).  As much as we welcome new members into our party, it is important to highlight the fact that there is a laid-down process that allows one to be a member of our party.”

The state Secretary of the PDP, Mr. Gidado Alakawa, said the party was not against the entry of new members or the return of former members, adding that new members and returnees must however abide by the constitution, process and procedures of the party.

He also stressed that the protesters were only expressing their democratic rights, adding that the party leadership did not have the power to reject new members.

“Everything we do in this party follows certain procedures and rules. To that extent, there is always this opportunity for free entry and free exit. There should not be anything personal about people coming into the party. Generally, people that want to come to the party are free to come as long as they are ready to work with the rules and regulations that guide entry into the party.