Akingbola Opposes EFCC’s Attempt To Tender Evidence Against Him 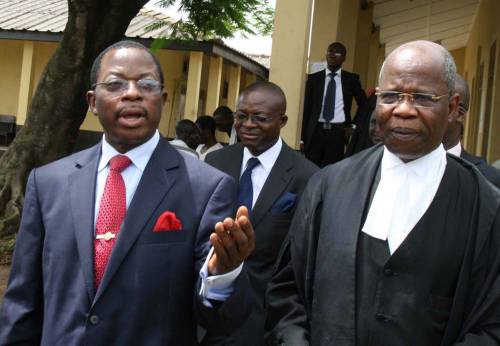 Akingbola, Managing Director of the defunct Intercontinental Bank Plc, on Friday opposed the move by the Economic and Financial Crimes Commission (EFCC) to tender statements of accounts from Access Bank.
The accounts allegedly linked Akingbola to the alleged fraud.
Through his lawyer, Wole Olanipekun (SAN), the embattled former MD said the statements could not be tendered because they were freshly sourced.
This, according to the senior advocate, contravenes proceedings for criminal trials that mandate all investigations in a criminal case to be concluded before the case is filed in a court of competent jurisdiction.
The 10-year-old trial witnessed a heated argument between the prosecuting counsel, Rotimi Jacobs (SAN), and the defence team.
The defence team also contended that the anti-graft agency could not substitute a witness in the case.
Akingbola’s 10-year-old trial reopened last month, after it had journeyed all the way to the Supreme Court and back.
He was re-arraigned on March 13, 2019 on further amended 22 counts, wherein he was accused of using N179bn belonging to the defunct Intercontinental Bank for “fictitious transactions.”
Among other allegations, the EFCC also claimed that Akingbola granted loans to a number of companies without adequate securities.
But the ex-bank chief pleaded not guilty.
At Friday’s proceedings before Justice Mojisola Olatoregun, the prosecution called its third witness, Uyoyou Ewhe, an Access Bank official, and sought to tender through him the statements of certain accounts opened in Access Bank.
Jacobs told the court that he settled for Ewhe to tender the documents “because the intended witness who was to tender the documents, we were told, has left the bank and is no longer in the country.”
But the lead defence counsel, Olanipekun, opposed him, contending that the documents were only freshly sourced.
“The prosecution was sourcing for evidence two days ago in a trial that started 10 years ago,” Olanipekun said.
Citing the case of Enahoro and the Queen of 1965, Olanipekun further contended that the prosecution could not substitute a witness.
“You cannot substitute a witness in a criminal proceeding; substituting a witness amounts to sourcing for evidence contrary to the decision of the Supreme Court in the celebrated case of Enahoro against the Queen of 1965.
“If you don’t have your witnesses, you don’t have your witnesses; you cannot substitute witnesses,” he said.
He also urged the judge not to admit the documents on the basis that they emanated from Access Bank, which he said was an interested party in Akingbola’s trial.
“Section 83 of the Evidence Act prohibits admissibility of this type of document. We have addressed Your Lordship on the interest of Access Bank in this matter, which is undisguised.
“This witness, the maker of this document, is an official of Access Bank. Put succinctly, this document is an Access Bank document. And I daresay, the documents were made as a result of evidence already given, may be to patch up the evidence; it is a natural consequence which the court is called upon to assume.”
But countering Olanipekun, Jacobs said, “The question of substituting a witness does not arise, and even if it arose, the prosecution is not limited to the list of witnesses in the proof of evidence originally filed.”
He said in the case of Enahoro, which Olanipekun cited, “the Supreme Court did not decided that witnesses cannot be changed.”
As to the argument that the documents sought to be tendered were freshly made, Jacobs said by virtue of the Administration of Criminal Justice Act, the prosecution was at liberty to file additional evidence any time before judgment.
He added that the documents were old statement of accounts of 1990.
“It is just the letter covering the documents and the certificate showing compliance that are new. It is new bottle with the old wine,” Jacobs said, stressing that the documents were relevant to the case.
After hearing both sides, Justice Olatoregun adjourned till April 18 for ruling.