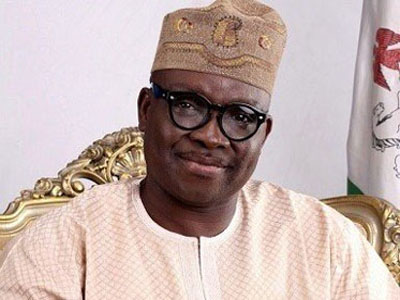 National Chairman of the All Progressives Congress (APC), Chief Odigie-Oyegun said Monday that the party was working hard to redeem Ekiti state from what he described as a very abusive government.

Oyegun who spoke when he received the report of the Primary election Committee from the committee chairman and Nasarawa state governor, Tanko Al-Makura said the present Ekiti state governor, Ayodele Fayose was very abusive and lacked decorum.

He praised the aspirants for their spirit of sportsmanship, adding that the disrupted primary,  gave the party an opportunity to organise a perfect one, adding that the committees, aspirants and the delegates at the primary deserves a gold medal.

He said the party leadership had started work to consolidate on the victory recorded at the primary, saying “We are working to ensure that the victory you have started is carried through come July 14, this year at the governorship election”.

Presenting the report, Gov. Tanko Al-Makura attributed the success of last Saturday primary to the maturity exhibited by aspirants, delegates and party members.

He said the exercise was successful because of the cooperation, passion and commitment of party members, delegates and the aspirants, adding that “More than anything else, is the conduct of the delegates at the primary, they were very matured and orderly”.

He added that in spite of the rains, the delegates carried themselves in a much matured way and even embarrassed themselves after the results were announced.

He said the party’s leadership should use the platform of solidarity exhibited at the primary to ensure coercion among its member in the state especially.

Al-Makura however, blamed the disrupted May 5 primary to the activities of hoodlums whom he said took advantage of security lapses then, to course crisis.