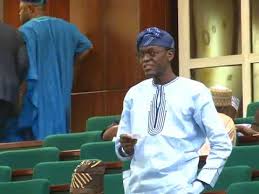 In politics, like in football game, a weak opponent is a blessing in disguise. This is because it makes the game easier to play. The emergence of Hon Nurrudeen Olaitan Akinwunmi as the flag bearer of the All Progressives Congress for the House of Representatives in Ifako Ijaiye Federal Constituency is a delight to the candidate and supporters of the People Democratic Party in Ifako Ijaiye Federal Constituency.

They are of the view that he is an unpopular candidate that can easily be defeated by them come 2019 General Election. According to them, if someone with the entire party mercenary behind him barely had paltry votes of 7000 in the bye-election that brought him into office, then defeating him in the forthcoming General Election will be a child play.

An insider source reported that Hon Fatimoh Aduke Muhammad who happened to be the People Democratic Party candidate and the All Progressives Congress main rival in the election was reported to have said she might have seen the election as a serious contest if the APC has fielded a candidate like Hon Benjamin Olabinjo or Hon Dayo Saka Fafunmi with cult-following followers; since the duo have supporters which cut across Ojokoro and Ifako-Ijaiye.

This source further stated that this might have given their candidate and the party some sleepless nights, but with the emergence of Hon. Akinwunmi, their candidate is sure of clinching the needed victory for the exalted position.

You will recall that Hon. Fatimoh is a candidate with fans and supporters in both Ifako-Ijaiye local government council area and Ojokoro Local Council Development Area which made up the Federal Constituency, having contested severally for the same position. While she is not letting down her guards, she is however more assured of victory than her previous shots at the poll; considering the seemly lack of acceptability of Hon. Akinwunmi by even the All Progressives Congress members, besides the neutral members of the public who have not felt his impacts in the last three years in office.

Though, the choice of Akinwunmi has remained a close guided secret among the top APC faithful in the State, expected to be made known on the last day of the submission of candidate names to the Independent National Electoral Commission; yet it has become an open secret as his loyalists have started bragging across the Constituency of the ticket being given to their person.

While the need to keep the party members in suspense perhaps can be attributed to his poor performance in the primary election conducted on 5th October, 2019 having secured the lowest votes cast; though some are of the view that the election has since being cancelled, while consensus is now being used to pick the flag bearers in Lagos State.

Our further investigation seems to buttress the claim of the People Democratic Party as some of the All Progressives Congress members who confided in our correspondents have promised to cast their votes for another party as a way of expressing their grievances to the party leadership if Hon. Akinwunmi is eventually picked as the party candidate in the General Election.

Meanwhile, we further learnt that Hon. James Adisa Owolabi who was allegedly initially being imposed has filed a petition against the candidate of Hon Akinwunmi at the party secretariat. The copy of the petition made available to us that Hon. James Adisa Owolabi is claiming to have scored 22,000 votes even though party members say all the people that voted in the primary election was less than 20,000.