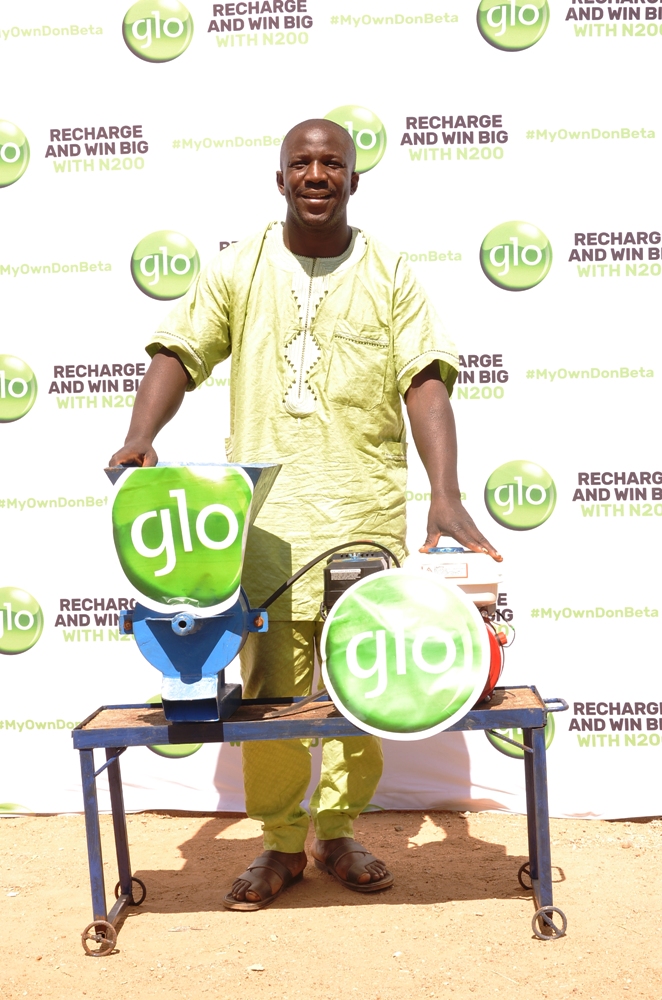 Fatai Ganiyu Abass was more than self-sufficient, practising as an auto-electrician and moonlighting as a Fuji musician. The future looked rosy for him until tragedy struck a couple of years back. He developed problems with his eyes and eventually lost sight in both eyes.​ His world seemed to fall apart. Without his eyes, his means of livelihood literally dissolved like ice cubes in the sun. He could only move around with the assistance of his 10-year old son, Abdulateef. The job of fending for the family fell on the laps of his wife, a petty trader. According to Abass, depression was setting in, but he kept consoling himself that things would take another turn for the better for him.  Sure enough, one day, he was sitting in his house when he received a call from Globacom customer care representatives informing him that he had won a grinding mill in the ongoing Glo Recharge and Win Big Promo also called My Own Don Beta.  He initially thought it was a prank or a case of wrong number. But when he showed up at Glo Office in Jos and the news was confirmed to him, he regained his old effervescent self. “I have got a new lease of life. With this grinding mill that Globacom has given me, my family has a new stream of income. My wife will add it to her petty trading. At the very least the cost of buying drugs for my eye condition will be taken care of,” he said. At the prize handover ceremony to prize winners in Toro community, Bauchi State on Friday, a grateful Abass rendered a Fuji song he composed to show gratitude to Globacom for a gift that he said would transform his family. At the ceremony, graced by the traditional chief of the region, Hardon Toro, Alhaji Mohammed Inuwa, Nollywood comic, Saeed Mohammed and other dignitaries, five other winners were given their prizes. Thairu Abubakar, a business man and Onyekwelu Chinenye Doris, a UNN Accountancy graduate received a tricycle each. Fatima Kabir a Youth Corper and her husband, Murtala Kabir, showed up to collect an industrial sewing machine, which the wife said she would use to further her ambition to sow wedding gowns. Abdusalam Musa Mamman also collected a grinding mill, while Abdulfatai Shittu, collected an electricity generator ​ at the community presentation at Toro, Bauchi State on Friday. Some 50 winners had been presented their prizes at the Jos Terminus Market the previous Monday. In all, over 700 winners had won tricycles, industrial sewing machines, grinding mills and generators. Globacom subscribers need to recharge their lines with a minimum of N200 to stand a chance of winning a prize in the promo.