‘Obi’s choice as VP a great honour to Ekwueme’ 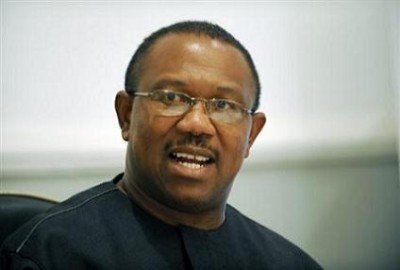 The People Democratic Party (PDP), Anambra chapter has described the choice of Chief Peter Obi as the running mate to Alhaji Atiku Abubakar as a great honour to one of its founding father, late Dr Alex Ekwueme.

Chief Ndubuisi Nwobu, Chairman of PDP in Anambra said this while reacting to the announcement of Obi as Atiku’s running mate in an interview in Awka.

Nwobu said the nomination was a ’round peg in a round hole’ as Obi possessed all the requisite quality to occupy the position having been a successful governor and a seasoned technocrat.

He said the state chapter was happy that the PDP hearkened to its call that Anambra be given the slot as it had plethora of individuals who could partner with any president to chart a new course for Nigeria.

“It is a welcome development, the choice of Obi is that of a round peg in a round hole, a governor he set Anambra on a pedestal for economic growth and left huge dune of money for future generation.

“During the campaigns, we told the aspirants that they should consider Anambra strongly for the slot of Vice President as a sign of appreciation to Late Dr Ekwueme who for his great work as a founding father of PDP.

“For the chapter here in Anambra, we are happy that Obi was picked and we are fully of confidence that the Atiku/Obi ticket is the magic wand Nigeria needs in all sectors especially economy,” he said.

Nwobu said the PDP through its primary had shown that it was the custodian of Nigerian democracy and had set great example which other political parties could learn from.

Also reacting, Mr Oseloka Obaze, Anambra governorship aspirant of the PDP in 2017 congratulated Atiku on picking Obi, saying he made the right choice.

Obaze, a diplomat, said it was a hard headed decision which was best in the interest of the country at this point in time.

“His Excellency, Atiku Abubakar has made the right choice in picking Peter Obi as his running make.

“Atiku has just the exhibited the ability to make hard-headed decision required of purposeful leaders.