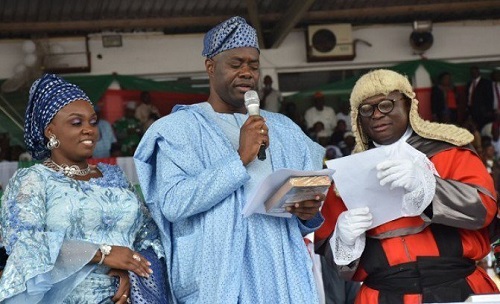 In fulfilment of parts of his campaign promises, Oyo State Governor Seyi Makinde on Wednesday said he will donate his entire salary as governor to Teachers’ Pension Fund.

He also proposed staggered salary increment instead of the outright payment of the N30, 000 approved national minimum wage for workers in the state.

Makinde made the disclosures while giving his inaugural address at the Obafemi Awolowo Stadium, Ibadan as 8th civilian governor.

The 40,000 capacity stadium was overflowed with people within, outside and around the event venue, leading to heavy traffic congestion around Liberty Road, Ring Road and the adjourning streets.

Dignitaries from different parts of the states and even the Southwest states attended the event.

But former Governor Rashidi Ladoja was conspicuously absent at the event.

Noting that his plans is to make the state the first state to pay above the national minimum wage, as the machinery has been put in motion, Makinde however stressed such a development would need time to materialise in the face of economic resources of the state.

Speaking on the new minimum wage, the new governor said he will have what he described as a ‘sincere conversation’ and arrive at the best possible decision which will put the overall interest of the people first.

He assured the government will set up a committee to look into all cases of those who believed they have been wrongly dismissed from civil service, including those whose cases have been decided in their favour in court who have not been reinstated.

He promised to reduce government overheads, increase the efficiency in tax collection, simplify the tax payment system and cut down on debt accumulation without concrete repayments plans.

He said “Recently, the Federal Government announced a new salary scheme in which the lowest cadre of civil servants are expected to earn at least N30,000.

“I know how access to this type of money will improve the lives of many of the families that I have had direct contact with.

“However, with the way the Oyo state account currently stands, I will be deceiving you if I said we are capable of taking on this burden.

“I believe in true federalism. I believe the states should decide the minimum wage of their workforce based on individual realities.

“All states are not created equal, so it is against the principle of fairness to apply a blanket rule to govern them all.