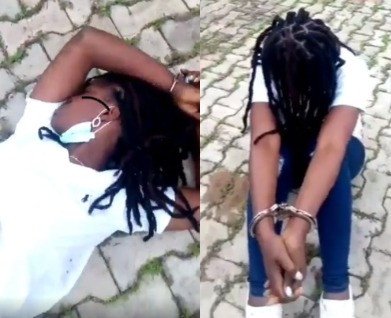 The Nigeria Police Force has confirmed the arrest of two policemen, Assistant Superintendent of Police Tijani Olatunji and Inspector Gboyega Oyeniyi, for allegedly subjecting a suspected robber’s girlfriend to dehumanising treatment at the man’s house in the Ibadan area of Oyo State.

The Force Public Relations Officer, Frank Mba, who confirmed the development in a statement on Thursday, said efforts were on to arrest another cop and a yet-to-be-identified civilian involved in the incident.

Mba, however, said the officers were on legitimate duties.

It was gathered that the police team had been on the trail of the suspect, who was traced from Lagos to his house in Ibadan, where he was arrested.

His girlfriend, who identified herself simply as Towobola, was also arrested.

One of the policemen, identified only as Wyclef, filmed himself interrogating Towobola and the suspect.

In the undated footage of the incident posted by one Olayinka Olaonipekun on Twitter, the alleged criminal said, “I was arrested at home. People should be patient, do the right thing and follow the law.”

The lady, while wailing and pleading with Wyclef that she was unaware of the suspect’s atrocities, said she only paid him a visit on the day of the arrest.

However, Wyclef and his colleagues, including one Gboyega, made sexist remarks against the 25-year-old.

Wyclef in particular accused her of being a prostitute, as she pleaded her innocence.

Why did you leave your former boyfriend that you are having sex with to follow an armed robber?” he demanded.

She replied, “I don’t have a boyfriend. You can check my phone. I just finished serving as a corper and collected my NYSC discharge certificate three days ago.”

Wyclef further asked, “Why did you break up with the person that deflowered you?”

She said, “He broke up with me himself because we used to fight a lot,” as the cop interjected, saying it was because she was promiscuous.

The policeman said, “If he (suspected robber) doesn’t have money and car, will you have an affair with him?”

“I do business and it is because he said he wants to buy shoes from me; please, I am begging you to stop recording me,” she replied.

She also denied Wyclef’s claim that she passed the night at the suspect’s house, saying she only visited “to assist him in cooking.”

“Are you saying he has not had sex with you since you met?” Wyclef asked.

“It was today that he attempted, but it didn’t happen, you can ask him,” she replied.

Wyclef later faced the camera and boasted that he “catches suspects like fowls”.

Nigerians, who took to the social media on Thursday, described the cops’ questions and treatment of the woman as discriminatory and unprofessional.

Olaonipekun, who posted the video through her Twitter handle, @olayinkaolaoni1, said, “Even if she’s guilty, what sort of questions and harassment is this?”

The Nigeria Police, in a tweet on Wednesday, said investigation had commenced into the incident.

In a follow-up reaction on Thursday, the police spokesman, Mba, said two of the policemen, Olatunji and Gboyega, had been arrested, adding that the suspects were being detained at the State Criminal Investigation and Intelligence Department, Yaba, Lagos State.

“Following investigations into the dehumanising treatment of a female citizen as shown in a viral video on Wednesday, July 22, 2020, the Nigeria Police Force has identified three police officers and one civilian accomplice who participated in the unprofessional act.

“Two suspects, ASP Tijani Olatunji and Inspector Gboyega Oyeniyi, have been arrested for their role in the discreditable conduct and incivility to a member of the public. They are currently being detained at the Lagos State CID detention facility, Yaba.

“Preliminary investigations show that the policemen, who are attached to Area ‘A’ Command, Lion Building, Lagos, were on legitimate investigation activities in Ibadan, Oyo State, where the incident took place. Effort is being intensified to arrest two other accomplices.

“Meanwhile, appropriate disciplinary procedure will be initiated as soon as investigations are concluded,” Mba said.