$2.1b arms cash: I never collected money from anywhere – Secondus 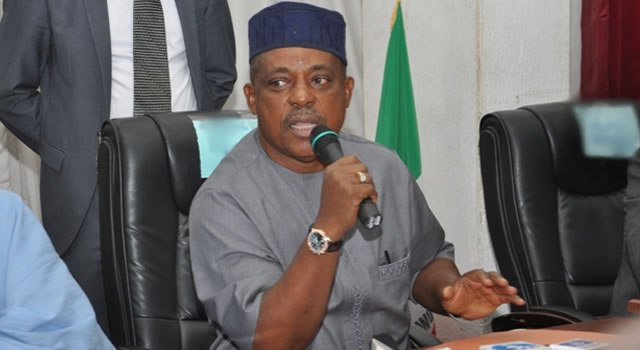 …Challenges FG to publish voucher, says we will meet in court

He challenged the Federal Government to publish the voucher(s) which he allegedly signed to collect the purported arms cash.

He said it was unfortunate that Economic and Financial Crimes Commission, which was founded and nurtured by PDP administration to tackle the issue of corruption in the system, had to turn itself into a pawn in the hand of APC.

But he was silent on alleged 54 vehicles purportedly bought for him from the proceeds of Strategic Alliance Agreement between Atlantic Energy Drilling Concept Nigeria Limited and the Nigeria Petroleum Development Company (NPDC).

Secondus, who bared his mind in a statement through his Special Adviser on Media, Mr. Ike Abonyi, said the Federal Government and the ruling All Progressives Congress (APC) were desperate to frame him up.

The statement said: “The attention of the media office of the National Chairman of the People’s Democratic Party, PDP, Prince Uche Secondus has been drawn to the desperation of the Federal Government and its ruling, All Progressives Congress (APC) to frame him up with some blatant fabrications ostensibly to distract him from carrying out his responsibility of rebuilding his party.

“The National Chairman would ordinarily not want to join issues with the government on a matter already in court but noted regrettably that the administration has great contempt for the court and the rule of law and has instead chosen to use blackmail and media persecution to defame and discredit their enemies. A gimmick Prince Secondus said has failed because Nigerians have come to know the antics of the drowning government.

“The Federal Government and its agency in their desperation to forge documents and defame him, forgot to reconcile their lies; the Minister of Information and Culture Alhaji. Lai Mohammad and the EFCC couldn’t agree on the date of the purported money collection and whether it was collected by him Secondus or by a faceless fictional Chukwura that has no surname.

“While they may have embarked on a wide search since 2015 for the surname of the so called aide of the National Chairman, Alhaji Mohammed claimed in his press conference on Good Friday March 29th, 2018 that Secondus collected the money on 19th of February, 2015, EFCC on their part on April 16th, 2018, eighteen days after said the money was collected on February 9th, 2015 and in another version still quoting the same EFCC claimed February 2, 2015.

Secondus said he will not succumb to blackmail and intimidation on his mission to reform the PDP.

He said it was sad that the Economic and Financial Crimes Commission, which was founded and nurtured by PDP administration to tackle the issue of corruption in the system, had to turn itself into a pawn in the hand of APC.

The statement added: “Secondus restated his earlier declaration that nothing, not even the blackmail and intimidation lined up against the opposition by the Federal Government would be enough to stop him from carrying out the reform of his party, the PDP, as the programme is aimed at repositioning the party with a view to rescuing Nigeria from the disaster called APC administration.

“Prince Secondus described as unfortunate and tragic the fact that anti-corruption agency like EFCC founded and nurtured by PDP administration to tackle the issue of corruption in the system had to turn itself into a pawn in the hand of APC administration to witch hunt and harass perceived enemies of government just to impress and keep job.

He challenged the government and any agency that have anything against him that just cropped up because he is trying to rebrand his party to bring such evidence to the court and stop character assassination in the media.

The statement said: “There’s no need to be talking about a case pending in court in the newspapers.  If the government has anything to say, they should file it before the court as demanded.”

“The National Chairman’s office is aware of a grand design by the government to stop at anything to tarnish his image. But he said that the move would fail.”

Secondus asked the Federal Government to release any evidence linking him with the purported collection of N250million from the Office of National Security Adviser (ONSA).

The statement said: “He (Secondus) challenged the government to come out with the vouchers with which he was said to have signed, adding that such signature would also be subjected to forensic analysis.

“I never collected any money from anywhere. I didn’t ask anyone to collect money for me as well and I didn’t sign any voucher to collect any money.

“It is pure blackmail which will never work. If they are cooking up anything, with the aim of blackmailing me, it will fail. I know that the task of uprooting this non-performing government would be horrendous. But God is always on the side of the people.

“I can understand the frustration of a party that enjoyed enormous goodwill from Nigerians three years ago but got it squandered with its ‘nepotic’ and insensitive administration.

“No amount of cheap blackmail and treachery will return the APC from the exit gate where Nigerians already pushed them to, awaiting 2019.

“The departure date for the APC has already been announced and the flight schedule would not be cancelled, because Nigerians cannot wait to see them off.

“Finally, the media office of the National chairman said that they are not oblivious of the fact that this government does not believe in court because they see rule of law as antithetical to their own agenda and understanding of democracy but noted emphatically, that truth must prevail over lies and propaganda especially as the populace have cried out to God for a rescue.”