2023 ELECTION : I dumped PDP for APC to take Cross River to the centre, says Ayade 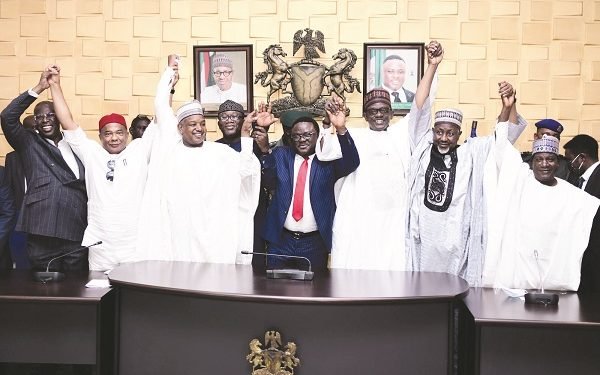 Cross River State Governor Ben Ayade, who became the latest governor to defect from the opposition Peoples Democratic Party (PDP) to the ruling All Progressives Congress (APC), said he took the step to re-classify his state.

He told visiting APC governors and leaders inside the Executive chamber in Calabar where he was received into his new party: “Recognizing the role of Cross River State; a state that has been reduced to want in body, spirit and in soul; a state whose revenue and resources had been taken; a state whose territorial boundaries has been tampered with. It is my responsibility to re-socket Cross River State to the centre.

“I, therefore, on behalf of the entire people of the state, to the extent of those that believe in the philosophy of peace, unity and progress, that Cross River State is today formally declared as an APC state.”

Ayade directed the state executive council members, members of the House of Assembly, local government chairmen and other stakeholders, who were present at the declaration, to go to their different wards and register as APC members.

Ebonyi State Governor David Umahi on November 16, last year, moved to the APC from the PDP while Edo State Governor Godwin Obaseki defected on June 18, 2020, the eve of the governorship election, defected from the APC to the PDP. He won his re-election.

The PDP chided him for jumping ship.

It advised the Cross River chieftains to ensure that the structure of the party was kept intact.

Ayade said Cross River State, with her lean resources, could not afford to remain in the opposition.

He noted that President Muhammadu Buhari had been doing his best for the country, adding that he deserved the support of all.

Ayade said: “Having seen the commitment and the sincerity of Mr. President; having seen the progress made so far and the tension created by social media manipulation. “And having recognised the issues and challenges in the state and nation; it is my responsibility as the leader of the people in Cross River State, to do the needful, to assist Mr. President to succeed.

Speaker of the House of Assembly, Eteng Williams, applauded the defection, saying: “What the governor has done is the right thing for the state. We believe in the progress and the good of the state. So we will follow the governor. The new slogan for us is #we move!”

A National Assembly member, Legor Idagbor, representing Obudu, Bakwarra and Obanliku Constituency, also assured of his readiness to follow the governor to the APC.

An elder statesman, Chief Asuquo Ekpeyong, hailed Ayade, saying that Cross River State needed to be with the center.

Expressing delight over the defection, Gbajabiamila said Ayade’s action had shown that APC is the party to beat in the country.

The Speaker, in a statement by his spokesman, Lanre Lasisi, said the Cross River State governor had taken the right decision and shown a good example for others to follow.

He said the ruling party was open to all, urging well-meaning Nigerians to join the APC to move the country forward.

The Speaker noted that APC will continue to be just and fair to all its members.

Omo-Agege, in a statement by his spokesman, Yomi Odunuga, in Abuja, said Ayade has displayed uncommon courage of conviction to take Cross River and the South-South, out of the periphery to mainstream.

He said: “It is remarkable that Governor Ayade, our party’s new leader in Cross River State, had been confronting numerous needless retrogressive intrigues from his former party, but while receiving him with open arms in APC, we unequivocally recognise him as the state party leader.

“The essence of this is to enable him focus on the task of accelerating further people-focussed development in his state by sharing the progressive vision of APC and that of President Muhammadu Buhari.

“Governor Ayade has wasted no time in declaring that he is joining our party so as to bring back Cross River to the centre in order to enhance her fortunes.”

Ndoma-Egba, who commended Ayade, said the governor’s defection will enrich  internal democracy, urging him to be consultative, inclusive, democratic, transparent and accountable.

He said: “I also expect that your presence in the APC will further strengthen the party and improve our electoral fortunes in Cross River State.”

Obono Obla, President Muhammadu Buhari’s former aide, said: “Governor Ayade is human, and he has his good and negative sides, just as I and you.”

He has done his best for Cross River State, and he is still doing his best. Cross River State has a huge debt profile which Governor Ayade inherited, but he has managed the state’s economy excellently, paying salary and doing projects. I salute him. He is a man of sagacity and courage!”

Obono-Obla pledged to work with Ayade to enhance the party’s fortunes.

Etta expressed delight over the governor’s defection; he will as value to the party in the state.

He stressed: “He has joined the party and the best thing to do now is to welcome him. His value will surely increase our chances in 2023 elections. There is a value in having a governor in our party. Some of his supporters will surely follow him, but whether there is going to be mass defection from PDP is a different matter.”

He stressed: “It didn’t come as a surprise to some of us. We knew, he was going to move, only the time we did not know.

“He is free to go to any party of his choice to realise his 2023 ambition, but PDP remains strong in Cross River.”

Lyod said that the state will remain a stronghold a PDP state, adding that Ayade’s defection would not change affected the chapter.

“Cross River is for PDP and nothing can change that,” he maintained.

The Chairman of National Youth Council of Nigeria (NYCN) Dan Obu said the governor had the right to move to any party to pursue his future political ambition.

He said: “As an individual he has the right to chose where to go. The party is just a platform, and he has just changed his political platform.

“We are not a political party but we shall meet at the appropriate time to take a position on where to vote.”

Deputy Speaker of Cross River House of Assembly, Joseph Bassey, who also defected to the APC, said the governor’s move had crumbled the PDP in the state.

He said the governor had moved to the ruling party with members of the House of Assembly, commissioners, elected council chairmen, councilors and over 6,000 political appointees in the state.

“We just have to help Cross River residents by aligning with the centre. Cross River receives the least allocation from the Federal Government and this is not good enough.”

Keyamo, in his official Twitter handle, described Ayade as an enlightened and accomplished governor.

He remarked: “I welcome one of the most cerebral, the most progressive, the most enlightened and the most accomplished, Gov Professor Ben Ayade, to the fold of the progressives. As my elder brother and friend from the South South region, this is the day we have been waiting for”

A former governorship aspirant in Kwara State, Saliu Mustapha said: “Ayade’s decision to join the progressive fold is bold and courageous. It was the right thing to do at this auspicious time in the life of the people of Cross Rivers State, and that of our country, Nigeria.

“In the face of serious national crisis as Nigeria is presently in, there should be a legitimate desire by all political actors to pull together in offering and finding solutions to the crisis at hand.”

Noting that Ayade has taken the right step, he also called on others to join the party.

“For Governor Ayade, the APC will be more than just a home. It is also going to be an ideological pathway. The APC offers him a decent and ethical platform to drive development through politics. The promise will begin to unfold in the days ahead.”

The PDP spokesman, Kola Ologbondiyan, said in a statement that the main opposition party had noted the governor’s defection to the APC.

The PDP called on its all critical stakeholders and members in Cross Rivers State to pull together and ensure that every structure of the party in the state remained intact.

It added: “The PDP wishes Governor Ayade well in his new political sojourn as well as in his future endeavours”.

The APC advised other PDP governors to join the ruling party.

Akpanudoedehe, who described PDP as a dead party, urged the remaining governors to leave it for a living and thriving APC.