2023 Election : Plot to pull down Tinubu will fail, says Fayose 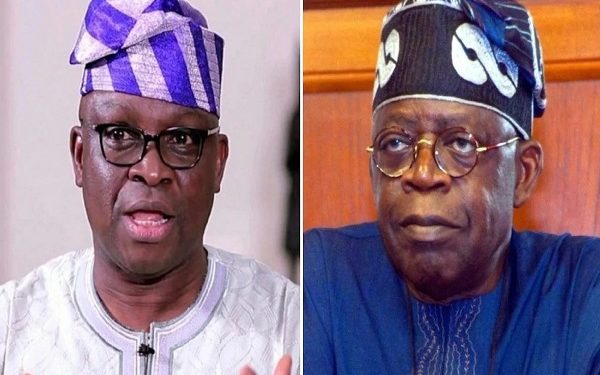 Former Governor of Ekiti State, Ayodele Fayose, has said the many  subterranean plots to pull down the National Leader of the All Progressives Congress (APC), Asiwaju Bola Tinubu, by some politicians in the southwest, will fail. He said this while also urging the Ondo State Deputy Governor, Agboola Ajayi, to return to the People’s Democratic Party (PDP) with his supporters.

Fayose said he would never associate nor join the group of rebels to destroy Tinubu because the APC leader laboured for the country through his focused leadership which stimulated the growth of Yoruba socio-political space with some southwest politicians now occupying vantage leadership positions across the country. The PDP chieftain who spoke at his Afao-Ekiti countryhome in Ekiti State, noted that some politicians nurtured to political stardom by Tinubu are behind his travails on account of personal interest.

He noted that Southwest people would resist any attempts to ridicule Tinubu, whom he described as image of Yoruba nation, noting that any attack against the former Lagos State Governor is an attack on the entire Yoruba people. He stated that APC stalwart does not deserves to be crucified by his political mentees, saying he had sacrificed enormously to groom and raise them from political obscurity to limelight. Fayose said the conspiracy against the ex-governor which was part of strategies to divide and create confusion among the Yoruba people would fail, urging Yoruba sons and daughters to support and accord him the necessary regards.

“I am not championing the course of Tinubu. I am not in the position to do that, but there is no denying the fact that Tinubu is a prominent Yoruba leader, whether in APC or in PDP. Fayose is a prominent son of Yoruba nation. For me, Tinubu, has paid his dues, I stand by that. I have not seen Tinubu after the Ekiti election by any means. We haven’t even met at a function or see him passed. I will not sit down in any corner to shoot down Tinubu. I am not a member of APC and I will never be. But I supported Governor Fayemi to be governor by Tinubu’s influence at a time,” he said.

Fayose also said in spite of the multifaceted crises in the PDP, that he won’t jump ship like some leaders of the party had done, saying: “if we are fighting in PDP, let us fight it inside PDP. People who have been jumping ship are armed robbers. They are being driven by greed and inordinate ambition. These are indications of the type of leaders we have in our country who are without ideology. They go for only what they feel would benefit them. Governor Umahi’s joining APC after benefiting several positions in PDP was unprincipled. We do not accept the excuses given by the governor. I am not satisfied with some things in PDP, but, leaving the party will not equally solve the problems.”

Fayose, who described Ajayi as a force to reckon with in the politics of Ondo State, said he would thrive better politically in a mainstream and liberal political party like the PDP. Agboola, who, in the build-up to the October governorship election in Ondo State, dumped the APC for the PDP and later abandoned the PDP for the Zenith Labour Party to contest the governorship election, had been a House of Representatives member under PDP.

The ex-governor made the call when the deputy governor visited the former in his Afao-Ekiti country home late Friday night to celebrate with him on his 60th birthday. In a statement issued by his media aide, Lere Olayinka and made available to newsmen yesterday, Fayose called on Agboola to return to the PDP and join hands with other leaders in Ondo to rebuild the party

“It is important for him (Agboola Ajayi) to put the past behind, return to PDP and join hands with other leaders in the state to rebuild the party. What I can tell you like a brother is that the past should be put behind you and the future should be focused on realistically. The best option before you now is to return to the PDP and I am encouraging you to give it a consideration because you need the party and the party too needs a strong political character like you,” Fayose said.

He also assured that all the raging crises between him and other leaders of the party in Ekiti and the Southwest region would be resolved in the overall interest of the PDP. “There is nothing to worry about. If Governor Seyi Makinde and I have issues, Nigerians should not worry themselves about that. I was the one who went to flag off Governor Makinde campaign in Ogbomoso. Whether he is backing Senator Olujimi or not, the fact remains that the struggle for the control of party’s structures in Ekiti has come and gone. So why do we have to fight over spilled milk? We won the congresses, but they are in court, if the court says it’s Olujimi that is right, we would follow her and if the court says she has no case, they should join us so that we can move the party forward,” he added.