2023 : Nigeria would be among the greatest nations in human history, Says APC presidential aspirant, Bola Tinubu 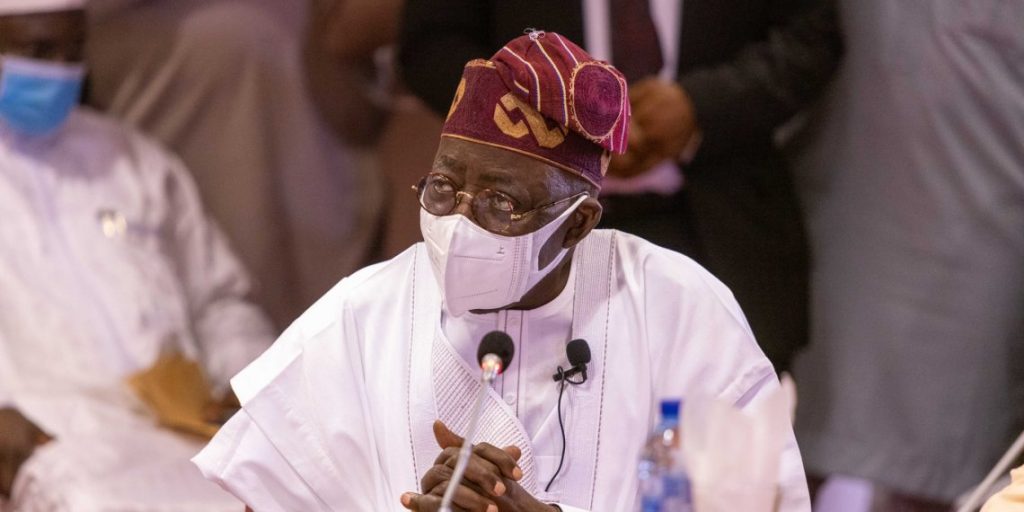 The former governor of Lagos State and presidential aspirant under the ruling All Progressives Congress (APC), Bola Tinubu, has listed his agenda for the country if voted into power, saying improving the economic prospects of young Nigerians must be prioritised to reclaim the glorious past.

Mr Tinubu spoke on Thursday as the lecturer 25th convocation ceremonies of the Lagos State University (LASU), Ojo. He spoke on the theme; “Global Trends: The Rightful Place of Nigeria in the World.”

The convocation lecturer, who was represented by the Lagos State Deputy Governor, Obafemi Hamzat, said time was running out for Nigeria to address her challenges, insisting that it is not enough to have potential but to convert them for the benefit of humanity.

He announced the donation of a N1 billion worth of centre to the university, which he noted would be for the incubation of leadership skills and training for future leaders in the country.

Speaking on the difference between the country’s potential and the sad realities, Mr Tinubu said Nigerians should no longer befool themselves, saying “history is patient yet not forever lenient regarding negligent folly.”

He said; “There comes a time when there is no time. Either action is taken, and the urgent word is said or precious chance slips away, lost forever. Our nation is approaching such a moment.

“We have boasted of enormous potential for decades, consoling our discomfort by saying that potential will be realised tomorrow. But something disappointing seems to happen when tomorrow becomes today. Years and decades have passed, yet greatness remains elusive.

“If greatness came merely by speaking of it, we would be among the greatest nations in human history.

“Instead, Nigeria remains locked in place. We remain an economy unjustly designed to export raw materials and import increasingly expensive finished products. The name of the raw materials might have changed from cocoa and groundnuts to oil and gas. The dire effects of this uneven economic arrangement remain the same

“We must be truthful enough to acknowledge this lapse, bold enough to correct it, and tolerant enough not to endlessly vilify each other for causing it. We are all both causes and hopefully solutions. Let us join hands. We must reform this nation.”

Listing his agenda and strategies for reform in the country, the presidential hopeful said the government must support strategically important industries to employ large numbers of young people for them to unleash their productive capacity and boundless energy.

He said national industrial and employment policies must move from the pages of documents to real life, saying the next sector to be properly reformed should be agriculture.

Mr Tinubu said: “We must increase food production while lowering consumer prices. Commodity exchange boards need to be reinstated to assure minimum farm incomes. Reforms are needed to give farmers more access to credit by loosening mortgage requirements and allowing greater leeway to execute forward contracts on what they grow.

“To combat food spoilage, we need to improve the rural road network and fund refrigeration systems for use by farmers and merchants in major local markets in each state. In the areas affected by extreme weather, water catchment systems and small-scale irrigation projects must take hold to mitigate the consequences of droughts and floods while also ensuring water for year-round agriculture.”

Real estate, education
The former governor also listed the real estate sector as one requiring urgent attention, saying its reform will allow the unlocking of economic potential in urban areas.

“It will make it easier to convey and mortgage real estate to lower the costs and time associated with the acquisition and sale of land, thus better allocating land to the most productive uses. Our mortgage institutions need to be revised and better-financed so they can provide affordable residential mortgages to young people just entering the workforce,” Mr Tinubu said.

According to Mr Tinubu, reforming education and the economy cannot be left out. He noted that formal education must be linked with the skills and expertise the business community seeks in the coming years.

He also said there is a need for a massive national infrastructure plan as he added that no national economy can grow beyond the capacity of its infrastructure to service the economy.

“Potable water should be readily available in our cities. Electrical power is the fulcrum of our development. We enact the reforms necessary to power businesses and homes at affordable prices. Firms in the sector must work as much for the public good as for private gain. Businesses contributing to power generation should receive generous tax treatment and forbearance,” Mr Tinubu said.

Centre donation
Meanwhile, the university’s vice-chancellor, Ibiyemi Olatunji-Bello, while congratulating the graduands on the successful completion of their studies, announced that Mr Tinubu donated a N1 billion centre to LASU.

Mrs Olatunji-Bello said it will be named Bola Ahmed Tinubu Centre for Leadership and Development, even as she urged the graduands to always conduct themselves in such ways and manners that will bring glory to them, their families, and their alma mater.

“You have been taught what it takes to succeed in life. Go and explore the world, do not limit your capabilities, be focused on whatever you do and involve God in your endeavours. Always remember that we are LASU and we are great,” Mrs Olatunji-Bello said.

She also congratulated all honourary awardees, saying their choice from amongst a lot of other suggested names after rigorous scrutiny, is a confirmation of their sincerity, sacrifice and unparalleled contributions and service to Nigeria.

“To Distinguished Professor Peter Akinsola Okebukola, the conferment of the rank of Professor Emeritus on you today is our modest way of appreciating all you have done and still doing for us at the Lagos State University, other Universities in Nigeria, and the world at large,” the vice-chancellor added.

On his part, the pro-chancellor and chairman of the university’s governing council, David Sunmoni, congratulated the families of the graduands.

He said; “Today’s convocation ceremony is for the Awards of PhDs, Conferment of the rank of Emeritus Professor and Honorary Doctorate Degrees to those who have been trained, examined, and undoubtedly found worthy both in character and in learning and eminent personalities who have contributed immensely to the development of humanity.”

The university’s chancellor, Gbolahan Elias, a professor, who was represented by the chairman of the convocation lecture and governor of Katsina State, Bello Masari, also told the graduates that their hard work and effort are recognised.

“You should continue to show interest in the progress of LASU, just as LASU must always keep track of your progress. The formal link between you and your university is provided for through the convocation. Please do not forget your roots here. LASU will certainly come to you for support in the months and years ahead,” he said.
Honorary doctorate awards were conferred on the governors of Kano and Borno states, Abdullahi Ganduje and Babagana Zulum, a professor of engineering, and the chairman, Nigeria in Diaspora Commission (NIDCOM), Abike Dabiri-Erewa.

Also honoured are the former chairman of First Bank, Ibukunoluwa Awosika, and the chairman of Ikeja Hotel Plc, Goodie Ibru.