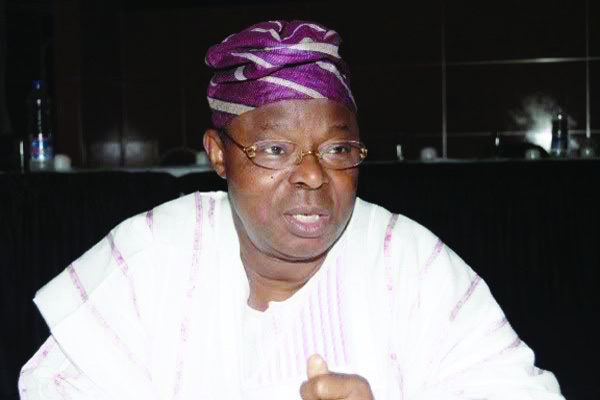 There was mild drama at the Federal High Court in Lagos Thursday as chairman of Honeywell Group Dr Oba Otudeko escaped arrest by responding to summons to testify in his companies’ N5.5billion debt suit against Ecobank Nigeria Limited.

Sporting his trademark Yoruba attire, Otudeko and his aides tried to prevent journalists from taking his photographs and videoing him as he left the court.

There were arguments between the lawyers on whether he could be examined, cross-examined and re-examined on his statement on oath.

A scuffle broke out between some of Otudeko’s aides and journalists covering the proceedings.

As his aides walked beside him out of the courtroom, they beat a quick retreat to the back of the building on sighting a TV camera.

Otudeko tried to escape through the back gate but the camera man was ahead of them.

The Honeywell chief and his group stood at a safe distance from the camera, but the TV reporter and cameraman stood at both exit points of the court premises. The move left Otudeko and his aides plotting the best means of escape.

Some of the business mogul’s aides confronted the cameraman, asking him: “Why are you doing this?” while shielding their boss.

There was a mild scrap when one of the aides tried to force the cameraman to stop recording the scene.

Otudeko succeeded in leaving the court at about 11.40am in-between his aides who shielded him from the cameraman.

He said while in the witness box Thursday: “This is a first experience, and I am extremely delighted to be here to see all professionals in practice. I was away from Lagos, and only got a call from my officers who informed me of the position, and I came back yesterday (Wednesday).

“I have great respect for the institution of the court, and so I have deposed to my witness statement and have filed it.”

Agbua asked Otudeko to tell the court his names, occupation and address. The witness replied: “My name is Dr Oba Otudeko. I am a businessman. My place of business is at No 6, Mekuwen St. Ikoyi Lagos.”

When asked about his professional qualification, Olanipekun objected, saying the proper practice was for the defence to lead the witness to adopt his written deposition.

He added that the defence could not embark on a journey of questions, adding that after adoption, the plaintiff counsel was entitled to cross examine the witness.

Agbua argued that the witness was a subpoened one, and so he was entitled to lead his witness in evidence without hindrance.

“The witness in question is our witness. The question I put to the witness being an introductory question is allowed under the law, where he lives, works, his qualifications. To that extent, I submit that the objection to my line of questioning is preemptory,” he said.

Justice Idris ruled overruled Agbua and held that the witness could only be led to adopt his witness statement.

Agbua then declined to lead the witness to adopt his statement.

During cross examination, Olanipekun asked the witness to tell the court: “Whether the then Managing Director of Ecobank was in attendance at the plaintiff’s office on July 23, 2013, when it was agreed that N3.5billion will be full and final settlement of the plaintiff’s debt.”

Before the witness could respond, Agbua objected, arguing that since the witness’ statement was not before the court, he could not be made to answer questions on it.

“We have gotten what we want and we do not want to lead the witness anymore. We hereby apply for his discharge,” Agbua said.

Olanipekun made repeated efforts to cross-examine Otudeko, but Agbua continued to insist that a witness whose statement was not adopted in court could not be cross examined.