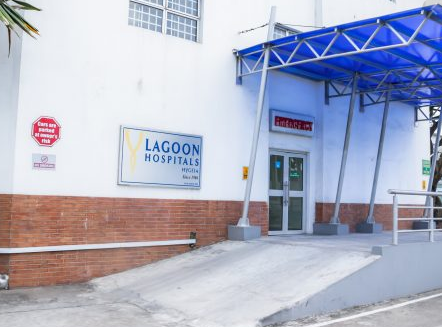 The hospital was alleged to have refused a protester, who was shot, an admission.

This led to the mob descending on the hospital and setting it ablaze.

He said: “This is Lagoon hospital on fire.  The protesters have extended their grievances because one of their members was shot and was taken to Lagoon hospital for medical treatment.

“He was rejected at the gate. Base on that, the protesters have extended their grievances and decided to burn the Lagoon hospital. Presently Lagoon hospital is on fire,” he said in the video.

The situation was tense at the Liverpool roundabout as passersby resorted to holding leaves to escape attack.

But Lagoon Hospitals Chief Executive Officer, Dr. Jimi Coker, denied it rejected the protester, who he said was brought in dead.

Coker, in a statement, said the hospital has always attended to emergency cases.

He said: “It has come to our attention that misinformation is currently circulating on social media regarding the true events that led to the vandalisation of our Apapa Hospitals, putting the lives of staff and patients at risk.

“The victim was unfortunately brought in dead by an Okada man who decided to abandon the victim’s body outside the hospital premises.”

According to him, the hospital was not aware the Okada driver had abandoned the victim on the road.

“It is on record that Lagoon Hospitals has always attended to all emergency cases, in line with our access to care policy for over 30 years. Unfortunately, we have had to shut down the hospital in Apapa due to this attack,” he said.