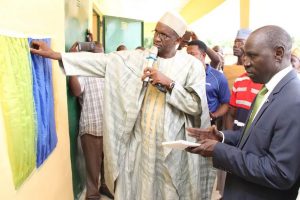 The Governor of Adamawa State, Mohammed Jibrila Bindow has commended Fidelity Bank Plc for supporting the development of education in the state and across the country through its sustainable Corporate Social Responsibility (CSR) initiatives.

The Governor who spoke during the handover ceremony of the newly constructed block of classrooms to the management of Kwarhi B’ Primary at Mubi in Hong Local Government Area (LGA), noted that the project was significant as it would go a long way to provide an appropriate learning environment for Children in the community.

Bindow who was represented by the Permanent Secretary, Ministry of Education, Mahmud Abubakar urged other financial institutions to emulate Fidelity Bank, stating that the lender maintains high standards of integrity and professionalism in its relations with the State government and host community.

Speaking in the same vein, the School Principal, Luka Usman thanked the Bank for its timely intervention, adding that the project has brought to an end years of teaching and learning in an unconducive environment. “The entire school was formerly built with mud and practically had dilapidated roofs.

“The pupils were made to learn under hard conditions by sitting on woods as school chairs, thereby making the environment unconducive for learning. This situation compelled Fidelity Bank to step in and gave the school a facelift”, Usman noted.

The Bank’s Regional Bank Head (RBH), North East, Musa Tarimbuka said the school project was borne out of the realisation that education remains fundamental to the development of any economy. He said the move was also in keeping with the culture of giving back to the society. “Early education is one of the vital instrument to a child’s development and that is why the Bank has taken this step to create a conducive environment for the pupils to learn”, Tarimbuka posited.

According to him, the Bank strives to reinforce robust, healthy community relations by identifying with host communities in activities that are most relevant to them. 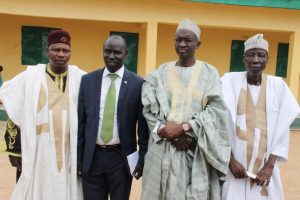