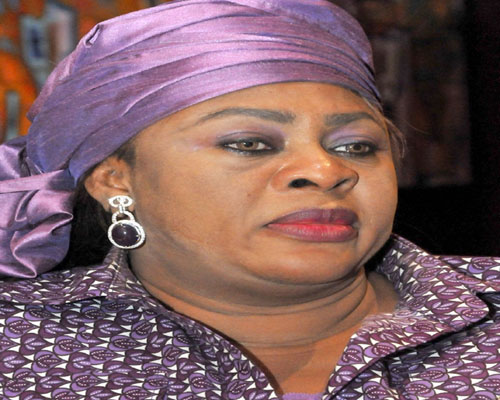 The Economic and Financial Crimes Commission (EFCC) appears to be running out of patience with former Aviation Minister, Stella Oduah, over an alleged N9.4billion curious contract involving her.

The agency believes she has been playing a ‘hide and seek’ game over repeated invitations to her for questioning in respect of the allegation.

She may be declared wanted if she continues to be evasive, The Nation gathered yesterday, although sources said she had informed the EFCC of her intention to now make herself available on February 19.

Reliable sources said yesterday that Oduah had been invited thrice in the last seven months over the security contract only for her to fail to turn up on each occasion.

This development informed the decision of the EFCC to consider the option of declaring her wanted.

The former minister, according to a fact sheet sighted by The Nation, is wanted by the EFCC in “respect of investigation into a N9, 443,549,531.25 contract awarded to I-Sec Security Nigeria Limited for the procurement and installation of security equipment in 22 airports across the country.

“The contract was awarded when she held sway as Minister of Aviation in the administration of ex-President Goodluck Jonathan.

“There were issues surrounding the contract, including alleged non-execution of the project in some airports, abandonment of the contract in a few ones, diversion of part of the contract sum and suspected case of money laundering.

“These are allegations she is expected to respond to in order to clear the air on the security contract. She is only expected to explain her roles.”

Attempts to interrogate Oduah over the last seven months have failed following excuses from her.

An EFCC source said:  “ She was invited on three different occasions to report for interview on the 13th June, 2017, 29th June 2017 and 13th November 2017 but she failed to honour any of the invitations.

“Rather than appear to face a panel that was raised by the EFCC to interrogate her, Oduah, through a letter dated  January 5, 2018, informed the commission that she would  honour the invite on January 29, 2018.

“The letter was duly acknowledged by the commission and just as the investigators were looking forward to her arrival, Oduah played a fast one on the EFCC with another letter indicating that she would no longer be available on January 29.

“She cited an invitation by the Deputy Senate President, Senator Ike Ekweremadu to accompany him to London where he was scheduled to deliver a lecture at the House of Commons on January 25.

“Oduah stated that her next convenient date to honour your invitation is 19th February, 2018”.

The source said it was obvious that this suspect “is not willing to submit herself to the Commission for interview in relation to the ongoing investigation, which leaves the Commission with a few options.”

The source added: “The Commission has been very patient with her but she may be declared wanted if she continues this hide and seek game”.

It was also  gathered that after several efforts, the EFCC has succeeded in  interrogating Senator Peter Nwaoboshi  over alleged failed N2.1b contracts;  obtaining loan from NEXIM Bank while still on the board of the bank; and for operating 30 accounts without declaring same to the Code of Conduct Bureau.

A source said: “As regards your enquiry, Nwaoboshi finally presented himself for interrogation by the Commission on 27 November, 2017  and, for two days , was grilled by operatives of the Commission on sundry allegations bordering on abuse of office, criminal breach of trust and under declaration of assets.”

Nwaoboshi, who represents Delta North in the Senate, is alleged to have “used his company, Bilderberg Enterprises Limited, to secure contracts worth N2.1 billion to supply new equipment to two agencies of Delta State Government but defrauded the state in the execution of the contract by importing and supplying used equipment which he passed off as new.”

He is also accused of laundering the proceeds of alleged criminal activity to acquire properties in Delta State and Lagos.

Listed among such properties are a 12-storey building at Apapa in Lagos belonging to Delta State Government which Nwaoboshi bought for N805million and an N800million warehouse at Apapa Wharf, Lagos

The 12-storey building property was allegedly acquired through one of his companies, Golden Touch Construction Project Limited.

The warehouse is already subject of interim forfeiture by the EFCC.

Continuing, the source said: “besides, Senator Nwaoboshi allegedly diverted proceeds of a NEXIM loan to acquiring properties, objectives which contravene the conditions for which the facility was granted in the first place.

“The senator equally failed to disclose his interest in about 30 bank accounts in the assets declaration form.

“Preliminary findings indicated that he has a case to answer. So, he might face trial accordingly.”