The Western Nigeria Security Network otherwise known as Operation Amotekun has inched closer to take-off as the states prepare to recruit operatives for the outfit.
Various states in the region have also acquired operational vehicles including motorcycles as well as communication gadgets among other logistics, and also secured the offices for their operations.

The Houses of Assembly have already prioritised the passing of the bill and are only waiting for inputs from more stakeholders at public hearings to be held across the states next week.

In Oyo State, the government has donated a building in Ibadan to serve as the operational headquarters of the security outfit in the state. The building is located in Iyaganku area of the capital city.

The area also houses the Criminal Investigations Department (CID) of the Nigeria Police Force (NPF) and the Southwest Zonal Headquarters of the Economic and Financial Crimes Commission (EFCC).

Besides, the state has also procured over 20 patrol vans, several buses and motorcycles to be used by Amotekun corps in all the nooks and crannies of the state.

The Chief Press Secretary to Governor Seyi Makinde, Mr Taiwo Adisa, confirmed the preparedness of the state for the take-off of the agency, saying that the building and vehicles had also been equipped with security and communication gadgets.

Adisa said the general template for Amotekun’s operation was ready, pointing out that the passage of the bill by the House of Assembly would clear the way for its implementation.

He added that recruitment and related activities would commence after the bill has been passed into law.

The Oyo State House of Assembly has slated public hearing on Amotekun bill for Monday, February 24.

Once the bill is passed and assented to by the governor, the security agency will take off.

It is entitled Bill for a Law to Establish the Oyo State Security Network Agency and Amotekun Corps to assist in maintaining Law and Order in Oyo State and related matters.

The Assembly had pledged accelerated hearing for the bill in line with the joint commitment of the six Houses of Assembly in the Southwest Region.

The Osun State Government plans to use the Hassan Olajokun Park at Gbongan Junction in Ayedade Local Government Area as the operational base of the Osun State Security Network Agency and Amotekun Corps.

The Chief Press Secretary to the state governor, Mr. Ismail Omipidan, said on the phone yesterday that although government is considering engaging about 720 operatives, the exact number of employees, entry qualifications and other details will be determined by the provisions of the bill.

But he said the government had not procured more operational vehicles apart from the 20 Hilux vans it contributed to the pool of the regional security outfit.

The Ekiti State Government said yesterday that the recruitment of personnel into the State’s Amotekun Corps would commence as soon as possible.

The Chief Press Secretary to the Governor, Yinka Oyebode, told The Nation that the recruitment exercise would commence once the bill was signed into law.

The bill was passed into law penultimate Friday by the State House of Assembly.

According to Oyebode, the recruitment exercise would be thorough to ensure that only people of impeccable character and unquestionable integrity are recruited, saying the composition of the personnel would determine the success of the security outfits.

He said: “You are aware that the House of Assembly just passed the bill, which is still awaiting governor Fayemi’s assent.

“So, Mr. Governor’s assent will come any moment from now. And it’s after his assent that the issue of recruitment will follow. It’s then several other things will be unfolded because they are operational matters.

“Definitely, the headquarters will be in Ado-Ekiti but the base may not be made known now. The full details will be made known after the governor’s assent.”

He said the state has already procured 20 vehicles and other security gadgets to aid the work of the outfit.

Members of the Ogun State House of Assembly are keen to provide for ‘befitting and compulsory insurance cover’ for personnel of Amotekun Corps in the bill now before them.

The Bill “HB.NO 035/OG/2020- seeks to Establish the Ogun State Security Network Agency and Amotekun Corps to assist in maintaining law and order in the State and for connected purposes.

The legislators, while debating the bill, said it was targeted at devising a community policing scheme to complement and collaborate with existing security agencies.

They added that the Amotekun Corps, when operational, would reduce crimes to the barest minimum in the state, the South West and the nation at large.

The Chief Press Secretary to Governor Dapo Abiodun, Kunle Somorin, told The Nation in Abeokuta that until the process for the establishment of the corps was concluded and the contents of the bill determined, it would amount to guess work to say what should be the qualifications of those that would be recruited into the corps or the take-off date.

But he was confident that by next week, significant progress would have been made, and when the Bill is passed by the state legislators and subsequently signed into law by the Governor, everything about Amotekun Corps in Ogun State would take a definite shape.

The Lagos State House of Assembly on Thursday commenced the process of amending the Lagos State Neighbourhood Safety Corps Agency Law 2019 to accommodate a section for Amotekun Corps.

The House took the first and second reading of the bill at plenary on Thursday and committed the bill to the Committee on Information, Publicity, Security and Strategy to report back to the House sine die

The House is to hold public hearing on the bill on Monday.

The Amotekun Corps, when operational, is to take charge of security at borders, forests, highways and the nooks and crannies of the state to ensure protection against hoodlums, kidnappers, cattle rustlers, bandits, etc.

The Corps can also collaborate with other security platforms in neighbouring states to ensure strengthening of security network in Lagos and such other states.

The Clerk of the House, Mr. Azeez Sanni, had informed the House that he received a letter from the state’s Commissioner for Justice, Hon. Moyosore Onigbanjo, on Wednesday on the amendment of the Lagos State Neighbourhood Safety Corps Agency Law (LNSC), 2019. 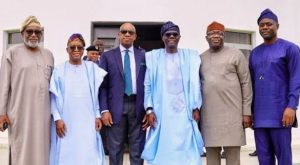 The House subsequently took the first and second reading of the Bill entitled a House of Assembly Bill No. 5 Lagos State Neighbourhood Safety Corps (LNSC) Amendment Bill 2020 and for connected purposes.

The Majority Leader of the House, Hon. Sanai Agunbiade (Ikorodu 1)  said that the bill though  an executive one , was predicated on the private member bill that established LNSC, which he said has been working well.

Agunbiade added that the bill incorporated the concept of a more dynamic and strengthened security platform than what currently obtains in Lagos State before.

He said: “The law only needs amendment to energise and strengthen the law owing to various challenges currently confronting the state and the South West region.

“It tries to create a unit out of the LNSC to be referred to as Amotekun Corps to take charge of security in certain areas such as in the forest, highway and other places to protect us against hoodlums, cattle rustling, kidnappers, herdsmen, bandits and others.

“The Amotekun corps is to take charge of security in borders, forest, highways, nooks and crannies of the state to be sure we are protected against hoodlums, herdsmen, cattle rustlers, kidnappers, bandits etc.”

The bill provides for a commander for Amotekun Corps who will be a retired police or army officer, and would bear arms with the approval of the police. “They will cooperate with other security platforms in Ondo, Oyo, Ogun, Ekiti and Osun States,” he said.

The Ondo State House of Assembly is expected to pass the Amotekun Security bill on Monday.

The lawmakers   cut short their recess last Tuesday to expedite fast track the passing of the bill.

It was committed to the House Committee on Security on Wednesday following a robust debate on the benefits of the bill when passed into law.

The clerk of the Assembly, Bode Adeyelu, had earlier read a letter from the executive on the need to establish the security agency in order to assist in maintaining law and order across the state.

Speaker of the House, Bamidele Oleyelogun commended his colleagues for cutting short their recess for the second time to attend to state matters.

The Speaker urged them to give the bill the desired attention in view of its benefits to the people.

Also, the Majority leader of the House, Jamiu Maito noted that the bill when passed into law would assist in reducing social vices in the state.

The bill was then committed to the House Committee on Security for proper scrutiny.

A public hearing on the bill is to be held on Monday to receive more contributions from the public.

Governor Akeredolu through his Special Adviser on security matter, Alhaji Dokumo said recruitment of personnel for the outfit will commence any moment from now.

Already, the state government had purchased 20 Vehicles and 100 Motorcycles for the use of the security outfit personnel.

The Western Nigeria Security Network was launched in Ibadan by Governors in the South West States, on January 9, as a way of confronting security challenges in the zone.