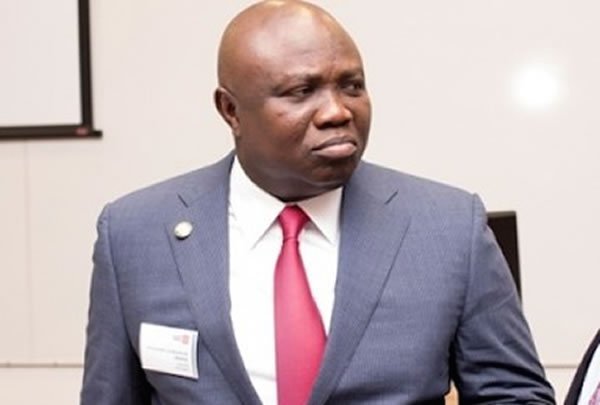 Some protesters on Tuesday demonstrated at the Lagos State House of Assembly and in front of the state secretariat, Alausa, demanding the probe of former Governor Akinwunmi Ambode.
The protesters alleged that Ambode mismanaged state resources.
The group, which gathered under the aegis of the Lagos Youth Vanguard, were led by their Patron, Mr Rasak Olokooba, and President, Mr Ibrahim Ekundina.
One of the placards held by the agitating youths read, “Ambode, submit yourself for probe.”
In a leaflet distributed to members of the public, they accused the former governor of weakening the institutions of government, adding that he also pursued wrong policies and programmes.
“He deliberately laid landmines through the obvious, improper, inappropriate and insufficient content in his handover note, which should serve as a guide to the incoming administration in the tradition of every civilised public officer.
“He flouted many government procedures and refused to abide by the procurement laws,” the leaflet stated.
The group assured Lagosians that it would use all means to ensure justice was served.
Olokooba, who spoke to journalists, said Ambode must be held accountable for what happened during his time in government.
He noted that the Economic and Financial Crimes Commission, which was investigating the former governor, should be allowed to do its job.
Olokooba said, “We don’t want anybody to mismanage Lagos. We want this to be a deterrent to others such as Local Government chairmen, senators and others in public offices who might want to do what the last administration did.
“Look at the state of Lagos, people were complaining bitterly over refuse in the state though they are disappearing now. Look at Badagry Road,” he said.
The protesters were later addressed by a lawmaker, Rotimi Olowo, who promised that the Assembly would ensure the right thing was done.