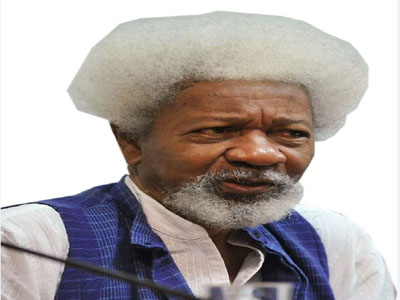 President Muhammadu Buhari’s anti-corruption battle got a ‘pass mark’ from an unusual quarter yesterday. It was rated above average by Prof Wole Soyinka.

The literary giant, however, scored the President below average on the anti-terror war.

Appraising the anti-graft battle, Soyinka said:  ”We have this issue of corruption, which is… and I frankly despise those who try to trivialise it in Nigeria simply because they don’t like the face of the man who is behind it.

On the anti-terror war, the literary icon said: “Take for instance, the issue of Boko Haram, if action had been taken at the beginning, and we are not talking about the time of the reign of Jonathan. When the first governor decided to make his state a theocratic state… that was when action should have been taken.

“The President of that time compromised because he was ambitious and he needed the support of the state governor. And when you start a theocracy, a movement will berth and killings will start. They start saying, that you are not holy enough’ and the killings start.”

He said the President should have learnt from the past by nipping in the bud the clashes between herders and farmers.

“Well, he is making progress, but then another problem has sprung up and that is where the problem is. Yes, he is very slow in responding. Buhari has failed in that respect.”

The Nobel laureate also defended his support for Buhari during the 2015 election, saying he was a better option to stop Dr. Goodluck Jonathan who, he said, was not doing enough to pilot the affairs of the country as President.

Soyinka said: “Gen. Buhari didn’t really win…, he won by default, because it was impossible to continue with Jonathan. Yes, I did use that expression, born-again democrat. The reason I used that expression is because when somebody compete in an election first time, second time, third time, fourth time and persists, he must believe in democracy.”

Justifying his support for Buhari, a former military head of state, Soyinka said: “First of all, Nigeria is not peculiar in that respect. We’ve had examples like that everywhere. We’ve had many military people doing that. So, the transition is not impossible.

“On the second circumstance, the fact that Nigeria has shown the military what a huge failure they were, makes it possible for one to identify the possibility of exception. In any case, I keep emphasising that Nigerians had difficulty of making a choice. Like I said, it was between the devil and the deep blue sea.”

Reflecting on his detention in the 60s and how he wrote on toiletries, Soyinka said:  “Yes, it was a solitary confinement. I was deprived of books – writing materials. So, I had to create my own world. So, toiletry paper became my template in which I could create the micro world in which I lived.

“They were supplying toiletries and they were so generous with it. Mostly, I was writing short, short pieces, mostly poetry. Somehow, I did get out. At a time, I have a book smuggled to me. Everything had to be hidden.”

The professor said it was high time the younger generation took the baton from the older generation, who he referred to as fogies.

He said: “I compare today with the dreams, aspiration that we had in those days when we considered ourselves as the ones going to lift the continent to world standard and make it competitive anywhere. But that has not happened.”

On this year’s presidential election, won by incumbent President Buhari, the playwright said: “It was one of the most depressed elections we’ve ever had. For me, it wasn’t possible for me to make a choice. I’m talking for myself. The simple reason is that the two candidates, they both had history. One is immediate, and the other is past, which made one to look for alternative.

When asked the chances available to the youth in Nigeria, where money plays a great role, Soyinka said: “When we started encouraging young people to come out, there was one person spearheading that movement and they could have come up with a consensus candidate.