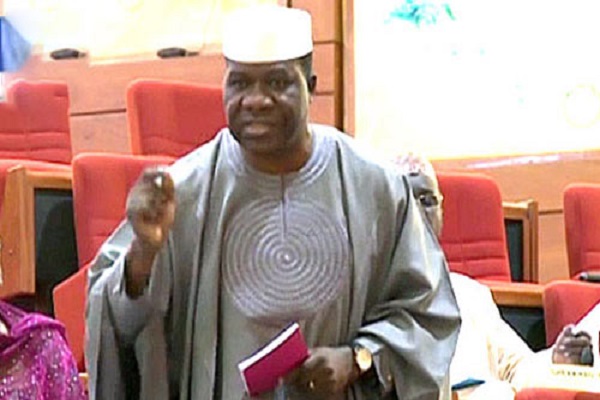 One of the aggrieved governorship aspirants in the All Progressives Congress (APC) Jan. 27 primary in Ekiti State, Sen. Opeyemi Bamidele, has sheathed his sword.

He said on Friday in a statement he issued in Ado-Ekiti that he was no longer interested in dragging the party or individuals to court over the outcome of the exercise.

Bamidele, the current senator representing Ekiti Central Senatorial District, stated that he had to change his earlier position after critical stakeholders intervened and appealed to him to have a rethink.

Consequently, he said he would no longer be challenging the victory of the immediate past Secretary to the State Government, Mr Biodun Oyebanji, who emerged victorious at the primary.

This, he stated, was for the sake of unity and cohesion in the APC in the state.

Bamidele explained that though, he still harboured resentment about the primary election, he would not seek redress in court, or defect from the APC.

He, however, still described the exercise as a “sham, a charade and flagrant abrasion of democracy ethos’’.

Bamidele, a former Commissioner for Information in Lagos State and one-time member of House of Representatives, is currently Chairman, Senate Committee on Judiciary and Legal Matters.

Shortly after the governorship primary, he threatened to head to court to challenge the outcome.

Bamidele maintained that his latest action did not mean he had abandoned the struggle to right the wrongs and make the party truly democratic.
Read Also: Why we’re still in court, by APC Ekiti stakeholders

“In spite of my strong convictions as expressed earlier, I have come to some irreversible conclusions.

“And these are the messages I need to pass on to all and sundry today as I temporarily break my silence on the way forward.

“One is to say that I have chosen to drop the option of going to Court to sue the party.

“The other is to make it crystal clear to everyone that both my supporters and I will not defect from APC.

“Details of the reasons which informed these choices will be communicated at a later date when my supporters and I address Ekiti State people. It is not just about me.

“It is about the unity and progress of Ekiti State and her politically undermined and economically afflicted people.

“It is also about ensuring that the ground is not prepared for reactionary beneficiaries to take advantage of seeming lack of capacity to manage our affairs as a ruling party,’’ he stated.

“I also must coordinate and lead my own aspect of this popular struggle to ensure that my supporters and stakeholders who had been isolated from the mainstream of the party become relevant again.

“Anything short of that can only be a highway to nowhere.

“We have all contributed so much to building this party in Ekiti State and the management as well as its decision-making process cannot be an exclusive preserve of a few.

“This is the new reality and those in control, including our national leadership must accept it or it becomes a popular subject matter of a struggle around which a popular movement must be built.