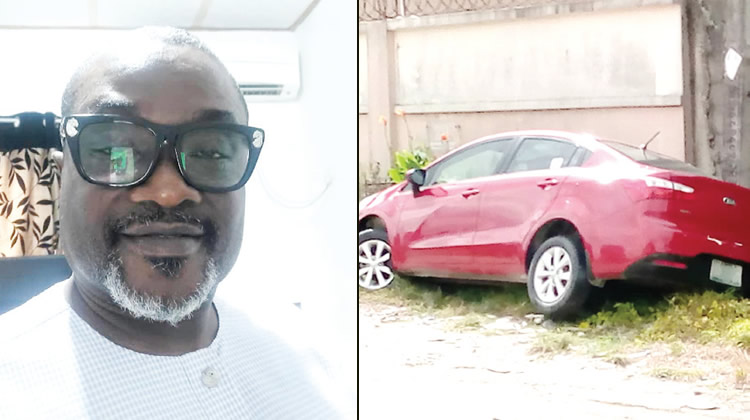 A Lagos-based socialite and contender for the Badore chieftaincy stool, Chief Rasak Jikoji, has been assassinated.

Our reporter gathered that Rasaki had a month ago celebrated a court ruling in his favour on the chieftaincy stool.

He was said to be with his personal assistant on Sunday, April 25, 2021, when he was attacked and shot dead.

Our correspondent gathered that the assailants also smashed his skull open with a big stone.

The 60-year-old was rushed to the Lagos Island General Hospital, where he was pronounced dead, and the matter was reported at the Langbasa Police Station.

The victim’s aide, who spoke on condition of anonymity for security reasons, said the attack happened around 3pm at the deceased’s house on Jikoji Court, Unity Estate, Badore.

He stated that the late socialite had invited him the previous day, adding that on getting to the house, he observed that Rasak was having a meeting with some persons.

The aide said Rasak later led his guests to a piece of land in the community.

The aide stated, “He joined them in their car, while I drove his car behind them. About 15 minutes later, he came down from their car and entered his car. He said we should return home.

“As we were approaching the gate, he wound up the glass. I was about to park when I saw two men coming towards the passenger’s side. One of them covered his face and the other had a gun.

“I believe I heard one of them say, ‘It is you that wants to become Baale’. They tried to shoot twice, but the gun did not go off. They came in front of the car and tried to shoot again.

“I put the car in reverse and tried to speed off. The road was not good and in our attempt to flee, the car ran into a ditch. Chief asked me to run out. I opened the door before they got to us. As we were running, they caught up with him.

“The second guy, who was chasing me, later went back. I looked behind and saw that chief had already engaged the other man who had the pistol. I believe that the gun fell at a point. But the guy, who went back, picked a stone and smashed it on his head. The other guy picked up the pistol and shot him.”

The aide said the suspects later escaped in a tricycle that he had earlier noticed on the premises without suspecting anything.

He added that upon his return to the scene, he saw Rasak in a pool of his own blood and raised the alarm, as his wife and other residents rushed him to the general hospital, where he was pronounced dead.

The victim’s wife, Tofunmi, claimed that Rasak wrote a petition to the police at the Zone 2 Command over some suspicious movements around him prior to the incident.

While urging the police to get to the root of the murder, she said her husband had several enemies, who might want him dead.

She stated, “Some people came to visit us because they wanted to buy a piece of land and he took them to the site. They did not like the land. About 15 to 20 minutes later, my husband was returning home.

“Some people said they sighted strange faces around the vicinity. As he was coming, he was attacked. They shot him and used a rock to break his head to be sure that he died. I was in the kitchen when I was called, and I ran out and saw his dead body in the middle of the road. We need justice.”

A family member, who asked not to be identified, said Rasak was involved in a struggle for the chieftaincy stool of Badore.

Our correspondent learnt  that the former occupant of the stool, Saliu Muraino Jikoji, died in June 2020 and the family nominated Rasak as his successor.

However, some community elders reportedly backed another candidate, whose name was forwarded to the local government secretariat.

The dispute was later taken to court.

Justice Idowu Alakija of the Lagos State High Court in March ordered that the parties should maintain the status quo, a ruling that the deceased celebrated as part victory.

The substantive suit was adjourned till May.

Our correspondent was told that the deceased’s five children were based abroad.

His lawyer, Olanrewaju Aiyedun, described the killing as “callous, criminal, satanic and vile.

Aiyedun stated, “I have absolute trust and unflagging confidence in the professional competence and impervious integrity of the police to unmask the murderers and bring the marauding and cannibalistic agents of untimely death to justice.

“The assailants riled and taunted him that he wanted to become baale before they snuffed life out of him. So, those who paid for his murder are not far-fetched.

“He was shot at a very close range and they smashed his head with a heavy stone just to ensure that he was dead and to satisfy their paymasters. They have murdered sleep and they will not also sleep.”

The state Commissioner of Police, Hakeem Odumosu, who confirmed the incident, said the case had been transferred to the State Criminal Investigation and Intelligence Department, Panti, Yaba.

He stated, “The two persons, who assassinated him, were in a tricycle. They accosted him while in the vehicle and fired him in the chest with what appeared to be an English pistol. He ran out, but they went after him and used a stone to break his head to ensure he died.

“The driver said before they killed him, they said, ‘So, you want to be baale, it is only someone who is alive that can become baale’. It was not a case of robbery. He was a direct target. We are working round the clock and closing in on his killers.”