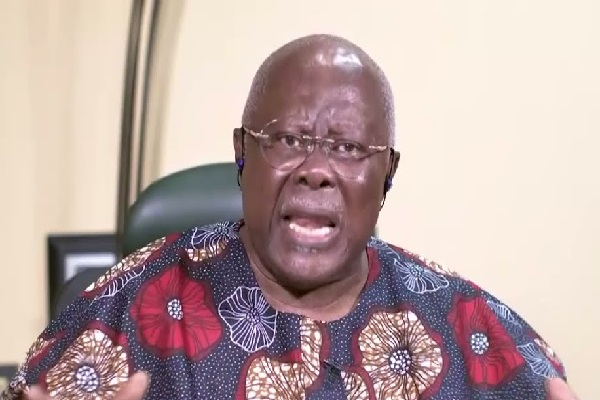 He said the way and manner the protracted leadership crisis is resolved will determine the fate of the platform in 2023 polls.

He said:”Let me declare categorically that the positions of presidential candidate and national chairman cannot come from the same zone.”

George, a Naval Commodore, spoke with reporters in Lagos on the consequence of politics of exclusion and inequality in the party.

Accompanied by his wife, Rolly, Senator Kofoworola Akerele-Bucknor and other party chieftains, the party elder advised Ayu to honour his promise to step down, if the presidential candidate emerges from the North.

He lamented that PDP has violated the principle of inclusion because the candidate, chairman and the campaign director are from the North.

George said it is desirable that the position of the national chairman should come to the Southwest to give the region a sense of inclusion, belonging, equity and justice.

To the party elder, PDP is facing a ‘clear and present danger’ that might thwart the window of opportunity for winning.
He said flawed personal interests are being sustained at the expense of party unity and cohesion.

According to him: ”We should not allow any sentiment – ethnic or religious to divide us. Unfortunately, with what we are presently witnessing, our party may lose the next presidential election if we continue to disregard or fail to address the feeling and grievances of ‘alienation’ being presently experienced by the entire Southern population of this great country. If this issue is dismissed, we cannot expect votes from them.
”We should be seen to pursue noble causes and not ethnic agenda. Ethnic groups in this country are at the precipice of collapse. It has never been this bad historically and Nigerians are waiting for us to change the situation of things for the better.

”Until this party returns to the founding fathers’ principles of unity, with equity, fairness and justice being the pedestal for any political decision taken in this party; and ensuring broad-mindedness to accommodate the concerns of all zones in this country PDP becomes vulnerable to disaster in the 2023 elections. Unless we are united, with equity, fairness and justice, our party may be fragmented before 2023.

”Some people are insisting that there is nothing wrong with this present arrangement. Some have argued that this happened during Chief Olusegun Obasanjo’s administration, where the candidate and the national chairman were from the same zone.

”Let the truth be told, there are remarkable differences in the scenario then and now. Then we had the leader of the party who was then a sitting president from the South and the candidate was from the North.

”In addition, the National Chairman, Dr Ahmadu Ali, was then on his way out. Today we have no sitting President from our party in Aso Villa so, that argument falls flat. We need to stop playing games and being zombified.”