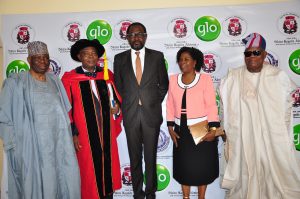 A foremost historian, Emeritus Professor Anthony Asiwaju has described the Oba Sikiru Adetona Professorial Chair on Good Governance endowed at the Olabisi Onabanjo University as first of its kind in Nigeria and Africa.

Professor Asiwaju who was the Chairman at the Second Annual Professorial Chair Lecture delivered by Professor Ayodele Olukotun recently described Oba Adetona as the oracle of Ijebuland, voice of the voiceless, epitome of moral authority, defender of peoples’ rights and exemplar of responsible governance .

In the same vein, Chairman of Globacom Limited, Dr. Mike Adenuga Jr,  congratulated the Paramount Ruler of Ijebuland, Oba (Dr.) Sikiru Kayode Adetona, on his 84th birthday celebrations and second annual Professorial Chair of the Olabisi Onabanjo University. He donated the sum of N20 million to the Chair on Good Governance for the expansion of the frontiers of knowledge and generation of ideas for Nigeria’s development.In a goodwill message read on his behalf by Mr. Folu Aderibigbe of Globacom at the Professorial Lecture held at the Adeola Odutola Hall, Ijebu Ode, Dr. Adenuga said Oba Adetona was a fearless and incorruptible patriot who speaks truth to power and works tirelessly for the enthronement of good governance in the country.

“Anybody who knows our royal Father very well would not be surprised that he endowed a professorial chair for Good Governance. Since infancy, our royal Father has been deeply involved in the promotion of good governance in the country. In the over five decades that the Awujale has been on the throne of his forefathers, Ijebuland has witnessed phenomenal giant strides in all sectors of the economy”, Dr. Adenuga enthused.

The Globacom Chairman who described the monarch as his “very dear first cousin and family head” wished him more fruitful years in the service of Ijebuland in particular and Nigeria in general, adding that the Oba Sikiru Adetona Professorial Chair Lecture is living up to its ideal of generating ideas for the enthronement of good governance and the building of an egalitarian society where no man will be oppressed.He said the Professorial Chair holder and lecturer, Professor Ayo Olukotun, was a perfect choice in view of his pedigree as a prolific public commentator and erudite scholar of repute, adding that the topic for the lecture, “Civil Society and Governance in Nigeria’s evolving democracy 1992-2018”, was on point and germane.Delivering the lecture, Professor Olukotun said a state can be challenged once it loses its moral authority and disagreed with the view that the civil society was dead.He averred that the civil societies were rather in a state of stupor requiring general re-awakening. Prof. Olukotun urged the society “to increasingly find ways of transcending the familiar divisiveness and centrifugal conflicts that bedevil the Nigerian polity”.Responding, Oba Adetona thanked guests for honouring him and lamented the shoddy treatment meted out to traditional rulers, submitting that governments at all levels should consult more with traditional rulers to enthrone good governance. He decried the spate of killings in the country which he said was hampering all other human developmental efforts, observing that “if you build hospitals, roads and schools without security of life and property, all efforts would come to nought”.