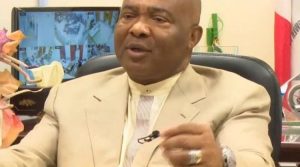 A court in Abuja has ordered the police to arrest Senator Hope Uzodinma (representing Orlu Zone, Imo West), and produce him before  September 25 this year.

Justice Abdulwahab Mohammed of the Grade 1 Area Court, Kubwa Abuja gave the order on Tuesday following Uzodinma’s failure to attend court to respond to a direct criminal complaint pending against him.

“Pursuant to Section 131 of the Administration of Criminal Justice Act, 2015, a bench warrant is hereby issued against Senator Hope Uzodinma in view of his failure to attend court to answer to the complaint pending against him,” the judge said.

The complaint was issued against Uzodinma and his two companies by Chitex Ventures Ltd and Chima Akuzie, who claimed that the Senator issued them a N200 million UBA dud cheque (bounced cheque).