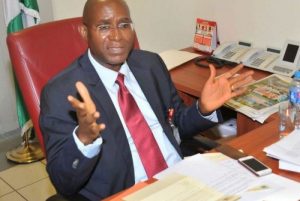 A High Court of the Federal Capital Territory (FCT) in Maitama, Abuja has ordered the police and the State Security Service (DSS) to desist from arresting Senator Ovie Omo-Agege (Delta Central) over Wednesday’s disruption of the Senate’s proceedings during which its mace was allegedly stolen.

Justice Isahq Bello, who is the court’s Chief Judge, gave the order Thursday while ruling on an ex-parte motion by the Senator.

Justice Bello said the order is to subsist pending the hearing and determination of the Omo Agege’s motion on notice seeking similar prayers as contained in the ex parte motion.

Justice Bello, in his ruling, retrained the four respondents from arresting Omo-Agege pending the hearing of the senator’s motion on notice.

The judge granted all the applicant’s prayers, which included:

*An order of interim injunction restraining the respondents, their agents and/or servants arresting and/or detaining the applicant either in their custody of any other law enforcement agency, or its servants, agents or privies or through any person working in concert with the respondent as its agents, by whatever means or however described pending the hearing and determination of the motion on notice filed in this suit.

*An order of interim injunction restraining the respondents, their representatives, agents or privies, howsoever described from any attempt or threat to violate the applicant’s fundamental right to personal liberty and right to freedom of movement pending the hearing and determination of the motion on notice filed in this suit.

*An order of interim injunction restraining the respondents from taking any or further steps detrimental to the applicant’s aforementioned fundamental rights to the applicant’s rights in connection with the facts stated in this matter pending the hearing of the motion on notice filed in this suit.”

Upon granting the Senator’s prayers, Justice Bello adjourned further proceedings to May 7 for the hearing of the motion on notice.

The judge equally re-assigned the case to Court 30 which is being presided over by Justice Usman Musale in the Jabi Division of the FCT High Court, where subsequent proceedings would take place