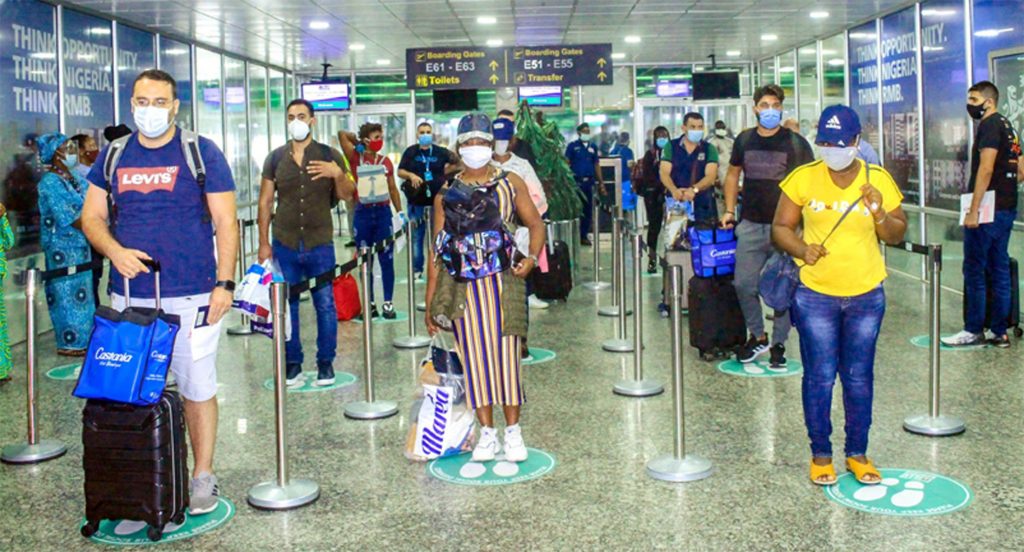 University students across the country appear not ready for reopening yet despite Thursday’s advice by the presidential task force (PTF) on COVID-19 that school administrators should set machinery in motion for resumption of academic work.

He gave no specific date for the resumption of academic work.

Reports from across the states suggest that private universities generally are ahead of the public owned institutions in their preparations for resumption.

Federal universities in particular are not showing signs of being anywhere near resumption.

Lecturers in such institutions have been on strike since March  over the non-implementation of the 2009 ASUU/FGN Agreement and disagreement over the Integrated Personnel Payroll Information System (IPPIS), among other issues.

The Academic Staff Union of Universities (ASUU) declared last week that facilities in many universities are not COVID-19 compliant.

Addressing reporters at the mini campus of the Olabisi Onabanjo University (OOU), Ago-Iwoye, Ogun State, the Coordinator of the Lagos Zone of ASUU, Prof. Olusiji Sowande, warned that it would be “suicidal” for universities to resume in an environment devoid of facilities to observe safe physical and social distancing.

ASUU said no concrete steps had been taken by the governments in any of the nation’s public universities to safeguard the health of their members and students from the COVID-19 pandemic should the universities resume as directed by NUC.

“Presently, hostel accommodations are inadequate, no facility on ground to carry out physical distancing in large and crowded classes, water and electricity supply are not reliable etc.

“Reopening tertiary institutions without taking concrete steps to address these issues would be suicidal.

“While government made arrangements for special bailout funds for airline operators and other private entities, no such arrangement was made for public universities.”

But the story is different in a few public universities where arrangements for resumption are in progress.

One of such is the Lagos State University (LASU). Its vice chancellor, Prof. Lanre Fagbohun, said the institution would implement a phased resumption programme with final year classes resuming first.

This followed the directive by Governor Babajide Sanwo-Olu that tertiary institutions in the state should resume on September 14.

Fagbohun said 400-Level to 600-Level students would have staggered classes between 9 am and 3 pm daily – particularly for students off campus for three months.

He said the 300 and 200 Level students would resume afterwards for two months of in-person classes before examinations.

He said: “We have also done a gradual phasing of the way our students are going to resume. We are starting with the 400, 500 and 600-Level students. And that will run for about two months, and the two months will be intensive with them – starting the lectures around 9 o’ clock in the morning and closing at 3 o clock for those of them that live off campus.

“And then the moment we are through with that final year group, we will go on to the 300 and 200-Level students.

“We will be able to maintain social distance because we have done an audit of our facilities; we know what each class will take. We know the number of students that will be coming in for 200, 300-Level so that at the end of the day we are able to protect the lives of our students and our staff and protect them from the pandemic.”

Acting Vice-Chancellor of the University of Lagos, Prof. Folasade Ogunsola, said she was at a meeting when The Nation called to ask about resumption plans.

Private universities on the other hand are understood to be awaiting the announcement of their resumption dates. Some of the representatives said that online classes were ongoing.

The Director of Information at Babcock University, Dr. Joshua Suleiman, said: “Government said that institutions should prepare for resumption. But we are ready for resumption. Once they say we should resume, we will resume.

“Our students are already resuming online for 2020/2021 academic session. On Monday, they will start registration online.”

The authorities of the institution are considering the first week in October.

A source said: “We have not heard the last word from the government about resumption.

“But that resumption, I must clarify, is about physical contact. The school has been on throughout the pandemic online. Our graduate finishing programme resumes on Monday. All activities have been going on.”

The Chairman of the University of Jos chapter of ASUU, Dr Lazarus Maigoro, said that the management of the institution had not discussed with the union the issue of reopening the university or its level of readiness.

Dr Maigoro said the local ASUU does not even “support reopening of universities, in line with the position of our national body.

He said: “There is lack of classrooms to take care of social distancing as contained in the COVID-19 guidelines, as most of the lecturers are within the vulnerable age and therefore will be risking their lives.

“There is no provision for isolation centres and equipment presently at the institution.”

Besides, he said, the students hostels are usually overcrowded hence their occupants will be vulnerable.

Maigoro expressed dismay that government has not assisted the universities with funds to implement the COVID-19 guidelines to the safety of the lives of lecturers and students.

He also said the ongoing national strike by ASUU has not been resolved and even if the universities are reopened, there will be no teaching and learning.

He also said “the management of the university has not discussed the issue of reopening the university and their level of readiness with us, so I won’t be able to say in clear terms what they have done so far. Only the Vice Chancellor can answer that for now.”

The Zonal Coordinator, ASUU, Prof. Lawan G. Abubakar, said the union was not averse to the reopening of universities but the right measures against coronavirus must be taken.

Enquiries at the universities pointed to the fact that the authorities of both universities have not put in place any structure for immediate resumption.

An official at the information department of UNN told our correspondent that they were not aware of such plans.

The ESUT head of Public Relations, Ossy Ugwuoti, said reopening the university depends on the Visitor, which is the governor.

He said right now, the whole situation seemed to be deadlocked, adding: “Even if you reopen now, you will not see the students.”

The Chairman, University of Ibadan chapter of the Academic Staff Union of Universities (ASUU), Prof. Ayo Akinwole, faulted moves by the government to reopen all schools without taking responsibility for the institutions to meet COVID-19 precautionary guidelines.

Akinwole stated that those leading the agitation for the re-opening of schools are private schools due to the negative impacts of the COVID-19 pandemic on them but warned that no pecuniary gain is more important than the lives of lecturers and their students.

Akinwole noted that before COVID-19, public varsities were overcrowded with students while hostel facilities have been taking more than their capacity.

He warned parents not to jubilate at the news of possible reopening but urged them to rather ask government to take responsibility for whatever surge in COVID-19 that may happen as a result of what he described as the “ill-thought” reopening.

His words: “Our union notes that there have been agitations from some quarters on the government to reopen schools. Leading this campaign are the proprietors of private universities. ASUU is not in any way opposed to this call.

“However, Nigerians should honestly interrogate this position. Has the Nigerian government met the NCDC criteria on COVID-19 protocols in our institutions? Must we endanger the lives of our children for pecuniary gains? Are these agitations not borne out of protecting their business interests?

“COVID-19 is still very much with us. It is in recognition of this fact that the government itself has rolled out certain conditions to be met before schools are reopened.

“How many of our public institutions can confidently vouch for the safety of our children, given the available facilities such as provision of running water for hand washing, social distancing among students, the use of recommended face masks and shields, which are key components of NCDC protocols?

“A situation where a room meant for four now houses 20 students cannot be said to be social distancing-compliant. What we are simply saying is that the Federal Government should adhere to its own set guidelines.

Our position as a responsible union on all this is that throwing schools open in the midst of all this is an open invitation to tragic explosion of the COVID-19 scourge on a scale never witnessed anywhere since its outbreak! When this happens, Nigerians will not say that they were never warned.”

The Academic Staff Union of Universities (ASUU), University of Port Harcourt, expressed doubts over the seriousness of the Federal Government to resume academic activities in universities.

The Chairman of ASUU, Austen Sado, said there was nothing on ground in UNIPORT to demonstrate that the institution was ready for resumption.

“There is nothing on ground to suggest that UNIPORT can resume. I don’t think that government is also through with its announcement because most of what will be required are not available. So, I doubt if government is serious with that announcement,” he said.

Though the UNIPORT authorities could not be reached for their official reaction, it was gathered from a source in the institution that the Federal Government would determine the readiness of the universities to resume activities.

The source, who spoke in confidence, said the government through the National University Commission (NUC) sent a form containing a to-do list to UNIPORT.

“The form contains requirements for safe resumption of academic activities. We indicated what we needed for safe resumption. The list was sent back to NUC but since then we have not heard from them. We are still waiting for them to provide those things”, the source said.

He, however, said UNIPORT on its own provided hand-washing facilities, soap and sanitisers at strategic locations in the university.

He said the school in conjunction with other companies like Shell and Agip procured a molecular testing laboratory for the school.