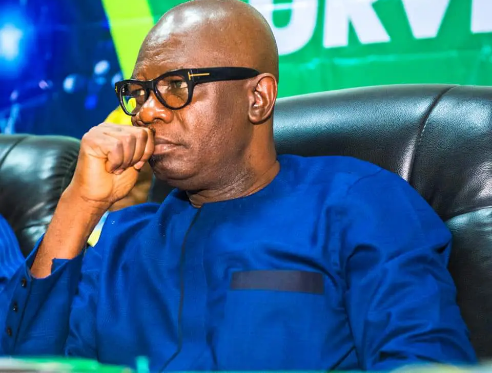 Different individuals filed suits in courts to seek their disqualification.

Obaseki and Shaibu are seeking a fresh mandate in the September 19 election on the platform of the Peoples Democratic Party (PDP) while Ajayi wants the PDP ticket in Ondo State.

They were all members of the All Progressives Congress (APC) until last month when they switched camps.

The plaintiffs in the suit against Obaseki and Shaibu are the APC and one of its members, Mr. Edobor Williams.

Shaibu, in the suit with reference number FHC/B/CS/75/2020, is alleged to have presented a forged West African School Certificate and tax clearance certificates to INEC, contrary to Section 31 of the Electoral Act and Section 182 of the Constitution of the Federal Republic of Nigeria.

In the suit against Obaseki, with reference number FHC/B/CS/74/2020, the plaintiffs want a  declaration that the governor, in INEC’s form EC9 at Column C, thereof sworn to on June 29, 2020 at the Federal Capital Territory (FCT) High Court Registry, Abuja to the effect that he obtained from the University of Ibadan (UI) in 1979 a Bachelor of Arts (BA) degree in Classical Studies, was false and contrary to Section 31 (5) and (6) of the Electoral Act, 2010, as amended.

In the alternative, the plaintiffs want a declaration that Obaseki’s INEC Form CF001 at Column “C” thereof sworn to on July 11, 2016 at the High Court Registry, Benin City, to the effect that he obtained from UI in 1976, a BA degree in Classical Studies was false and contrary to Section 31 (5) and (6) of the Electoral Act, 2010, as amended.

Also being sought by them are: a declaration that Obaseki’s statement contained in INEC’s form EC9 at Column “D” thereof sworn to on June 29, 2020 at FCT High Court Registry, Abuja, to the effect that he worked in Afriinvest Limited from 1994 to 2014, when he retired, was false and contrary to Section 31 (5) and (6) of the Electoral Act, 2010, as amended;

A declaration that Obaseki’s presentation of a BA degree in Classical Studies from UI, with a sole signatory of the Vice-Chancellor and no effective date of award, as against the standard operating procedure of the Examinations, Records and Administrative Data Processing Division of UI, amounts to the presentation of a forged/false certificate to INEC, contrary to the provisions of Section 182 (1) (j) of the Constitution of the Federal Republic of Nigeria (FRN), 1999, as altered;

A declaration that Obaseki’s presentation of Advanced Level WAEC certificate, dated June 1976, which showed that Obaseki sat for examination in subjects materially different from those shown in the testimonial of the Institute of Continuing Education of September 25, 1975, where Obaseki was a student and from where he purportedly wrote the said examination, amounts to the presentation of a forged/false certificate to INEC, contrary to the provisions of Section 182 (1) (j) of the Constitution of FRN, 1999, as altered.

The plaintiffs are also praying the court  for an order disqualifying Obaseki from contesting the Edo state governorship election on September 19 or on any other date that might be approved for the purpose, on the grounds that Obaseki supplied false information on oath to INEC, contrary to Section 31 (5) and (6) of the Electoral Act, 2010, as amended.

The plaintiffs want INEC to be ordered to remove Obaseki’s name from the list of nominated or sponsored candidates for the crucial election, while PDP should be restrained from participating in the election, among others.

Why Ajayi should be disqualified -PDP chief

A chieftain of the Peoples Democratic Party (PDP) in Ondo State, Mr.Konstante Timi Olopele, is asking a State High Court, Akure to disqualify Deputy Governor Agboola Alfred Ajayi from participating in Wednesday’s primary of the party.

Olopele claims Ajayi breached  the extant laws regulating the West African Examination Council (WAEC) and the Nigerian Law School attendance when he served as elected Local Government Chairman and member of the House of Representatives respectively.

A group, the Sunshine Redemption Group (SRG) separately wants him disqualified on the grounds that he submitted only his secondary school certificate to contest the governorship election.

Governor Rotimi Akeredolu with whom Ajayi recently parted ways ahead of defection to the PDP yesterday described the deputy governor as a wrong choice by him for the 2016 election.

Olopele, in the suit filed by Akpofiwei Anthony Macleans of AMAC Solicitors, said the Ondo Deputy Governor breached the code of conduct for public officers and ought to be banned from holding any public office for a maximum period of 10 years.

Plaintiff said Ajayi has consistently acted in breach of Section 1, 5th Schedule, Part1 of the Code of Conduct for Public Officers and Section 9 of the 1999 Constitution as amended.

He hinged his prayer for the disqualification on the alleged breach of the provisions of the regulations of the West African Examination Council (WAEC) Act, Cap W4 Law of the Federal Republic of Nigeria, 2004.

Olopele argued that Ajayi breached the extant laws regulating WAEC and Nigerian Law School attendance while he served as elected Local Government Chairman and member of the House of Representatives respectively.

On its part, the Sunshine Redemption Group (SRG), in a statement by its Chairman, Mr. Emmanuel Agbara, and Secretary, Chief Ebiemi Williams, said Ajayi should be disqualified for submitting only his secondary school certificate to contest the governorship election.

It claimed that Ajayi’s decision not to present his law degree certificate from Igbinedion University, Okada, Edo State, and his  Nigerian Law School certificate left many questions unanswered.

It wondered why Ajayi was reluctant or afraid of presenting now the same sets of certificate he used to contest for the  House of Representatives and the office of deputy governor.

“The truth is that PDP risks a potential jeopardy in the candidature of Agboola Ajayi if he is allowed to contest for the party’s governorship ticket next Wednesday,” it said.

“If he is sure that he graduated from the University and the Law School as he officially claimed in the past, let him submit those certificates along with his school certificates, but we know he dare not.”

But Ajayi said he was unperturbed by the “sound and fury” of those making allegations against him.

His spokesman, Babatope Okeowo, said: “The facts and issues in the matter are the same as the case already adjudicated upon by the Court of Appeal in case appeal number: CA/B/EPT/330A/2008 between the Deputy Governor, Hon. Agboola Ajayi (then Member of the National Assembly) and Prince Olubukola Ebietomiye of the Democratic People’s Alliance (DPA) in 2007, wherein the Appellant was absolved of any wrongdoing.”

He urged his supporters to “be focused and undeterred.”

He added: “These are deliberate attempts made to distract attention. We know their principal sponsor and his antics. Just like the impeachment plot, this too will fall.”

Only two of the candidates –Agol Ebun Tracy, the flag bearer of NNPP, and Omogbelehan Edomoina Pauline, deputy governorship candidate of Labour Party, are women.

The youngest of the contestants are Edemakhiota Godwin Osaimiamia and Sunday Johnbul both of AA. They are 35 years old, same as Osadolor Eghe Festus, deputy governorship candidate of NRM; Ibio Lucky Emmanueul of ADP  (36) and his running mate Desmond Kola Imasuen (36).

The list is on display at the commission’s offices in Benin, the Edo State capital and the 18 Local Government Areas of the state, which has also been uploaded on the Commission’s website.

The publication of the list is  in compliance with INEC timetable and schedule of activities and in accordance with Section 34 of the Electoral Act 2010 (as amended).

The Chairman of the commission’s Information and Voter Education Committee, Festus Okoye, said that with the publication of the final list of candidates,” no political party can withdraw or substitute any of the nominated candidates or tamper with the list and particulars of the candidates in a manner inconsistent with the intendment of the Constitution and the Electoral Act.”

He urged the political parties to pay close attention to the timelines stipulated in the Timetable and Schedule of Activities of the Commission as well as the provisions of the Constitution and the Electoral Act.

Both camps traded hot words yesterday over alleged destruction of campaign billboards of the governor.

It also accused the governor and his agents of abuse of office and disregard for the law.

The Vice Chairman of the APC Media and Publicity, Patrick Obahiagbon, at a press conference in Benin said: “Obaseki is heating up the polity ahead of the polls with reckless and provocative comments, media blackmail and criminal actions of intolerance, including mass destruction of opponent’s campaign materials.

“The unfortunate and criminal action took place on July 16, 2020, when the Edo State Government expressly directed one Dave Giwa Amu, who is parading himself as the Managing Director of the Edo State Signage and Advertising Agency, to commence the immediate removal and destruction of our billboards.

“It is pertinent to note that the outdoor billboards and indeed other campaign materials were duly paid for, designed and erected in full compliance with all legal requirements.

“Edo State Signage and Advertising Agency, purportedly led by the so-called Dave Giwa Amu, an avowed supporter of Obaseki, is an agency that is yet to receive the approval of the Edo House of Assembly.

“The agency, as of today, is unknown to the laws of Edo State and it is visibly being weaponized by the state government, an interested party in the election, to give itself an illegal, unfair, unethical and fraudulent advantage, as we approach the polls.”

Edo APC also described the move of Obaseki’s administration as a new low, and said it had forwarded a petition to Edo Commissioner of Police and the Independent National Electoral Commission (INEC) on the matter.

Obaseki’s camp, however, denied the allegations. It said the Edo government did not bring down the APC governorship candidate’s campaign billboards.

The governor’s Special Adviser on Media and Communication Strategy, Crusoe Osagie  said: “The allegations are ludicrous and unfounded. The tactic is true to Ize-Iyamu’s approach to politics, which has never won him any success in previous elections.

“Anyone who knows Ize-Iyamu very well knows that this is his approach to politics. He raises the alarm and cries wolf when no one is chasing him. The Edo State Government has not removed any of his billboards. This is cheap blackmail to score lame political points.

“Ize-Iyamu is a politician that assumes relevance during every election cycle. This is what he does for a living and has no other job. It is not surprising to see these statements from him and his team. He should not be taken seriously, and his statements should be disregarded.

“He (Ize-Iyamu) will go back to his cocoon after he has been defeated at the September 19, 2020 election, and he will most likely resurface after four years to repeat this cycle. So, we are accustomed to his childish charades.”