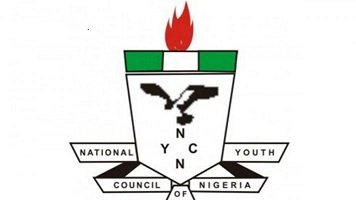 The National Youth Council (NYC) on Tuesday stormed the National Assembly, calling for the sack of the nation’s Service Chiefs.

The call to relieve the Service Chiefs of their duties as contained in a 7-point demand made by the NYC on the government if it hopes to calm frayed nerves and end the on-going #EndSAR protests.

The protesters had gathered at the Unity Fountain as early as 8 am; from where they marched on the popular Shehu Shagari Way Enroute the Three Arms Zone to the National Assembly.

For several hours, the protesters took control of the main entrance of the National Assembly; demanding to speak with the leadership.

Top on the list of demand was the request asking President Buhari to rethink the current security architecture by allowing fresh hands to take charge.

NYC protesters in solidarity joined another group of protesters; the National Association of University Students who had mounted siege outside the Nations. Assembly; calling for an end to the protracted strike by the body of University teachers(ASUU).

As part of its demands; the NYC requested the Federal Government to waive the tuition fees of University students to cushion the impact of Covid-19 on their parents.

While NYC welcomed the full implementation of the deregulation of the petroleum industry; it however kicked against the recent hike in electricity tariff in the country.

Addressing the protesters, the National Assembly leadership led by Deputy Senate Whip, Senator Abdullahi Sabi promised to deliver their demands to President Buhari; adding that he was confident the President will address them in due course.

“What you have asked for we will do it very very soon. If Nigeria is sick, all of us will suffer. We are sincere and we going to be committed. We are going to hold the executive accountable,” he said.