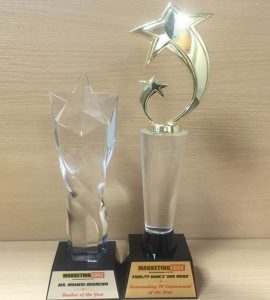 • Wins Banker of the Year and Most Outstanding TV Commercial

Lagos, Nigeria: July 9, 2018 – Top Nigerian lender, Fidelity Bank Plc shone brightly at the recently 2018 Brands & Advertising Excellence Awards which held at the Balmoral Hall in Lagos last Friday, clinching two awards on the night. The Bank’s Chief Executive Officer, Nnamdi Okonkwo was named ‘Banker of the Year’, whilst the bank was adjudged to have had the most Outstanding Television Commercial in 2017.

According to the organizers; Marketing Edge, Okonkwo bagged the Banker of the Year in recognition of his visionary leadership and drive which has changed the fortunes of the Bank’s through a customer-centric approach. “Fidelity Bank, under Okonkwo’s dynamic management, has turned full circle in the attainment of brand equity and remarkable growth in profitability” it stated.

Commenting on the awards, Okonkwo thanked the management of Marketing Edge for the recognitions, stating that they have given further boost to the bank’s aspiration of becoming the financial brand of first choice to all. He dedicated the awards to all stakeholders, including customers and staff members, for their support and contributions to the bank’s steady growth and strong financial performance.

“We have established a stronger connection with the consumers through a focused and consistent communication of our brand essence and vision. This awards are a reflection of the hard work and determination of everyone at Fidelity Bank over the past couple of years. They are also a reminder that expectations are high and as Fidelity people, we must continue to strive to meet and surpass expectations” he stated.

The ‘Our Word’ campaign was launched in 2017 and headlined with a television commercial to underscore Fidelity Bank’s commitments to always keep its word to customers and stakeholders. The campaign was according to Divisional Head, Brand and Communications, Fidelity Bank, Mr. Charles Aigbe, was designed to underscore the very essence of the bank, epitomizing its commitment to keeping faith with customers no matter their class or creed.

“We wanted to remind our customers and the public to hold us to our words and reinforce our resolve to continue to providing excellent banking services and solutions in easy and convenient ways” said Aigbe. Headquarter in Lagos, Nigeria, Fidelity Bank is a full-fledged commercial bank, with over 4 million customers who are serviced across its 240 business offices and various other digital banking channels.

The bank has in recent times won accolades as the Best SME Friendly Bank, Best in Mobile Banking and the Most Improved Corporate/Investment Bank among several industry awards and recognitions. The bank was also ranked the 4th Best Bank in the Retail Banking Segment in the 2017 Banking Industry Satisfaction Survey conducted by KPMG.

Focused on select niche corporate banking sectors as well as Micro Small and Medium Enterprises (MSMEs), Fidelity Bank is rapidly implementing a digital based retail banking strategy which has resulted in an exponential growth in savings and a corresponding surge in customer enrolment on the bank’s mobile/internet banking products.