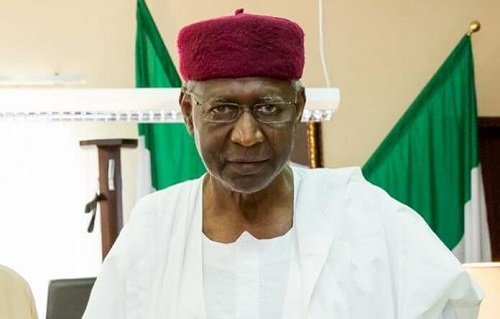 •Lagos State opens up on how he died
•Witnesses report seeing massive police presence at hospital where he died
•He had no consultations with PTF, NCDC before going for private treatment

The late Chief of Staff to the President, Mallam Abba Kyari, was hours from being discharged from the hospital on Friday before his condition unexpectedly took a twist and he never recovered,  we gathered on Sunday.

Kyari died at First Cardiology Consultants Hospital in Lagos on Friday from what the Lagos State government yesterday described as complications of Coronavirus infection.

Witnesses told us yesterday of massive police presence at the private facility on the fateful day, apparently after he was certified dead.

Sources said Kyari had shown signs of recovery which was a sign that he could be discharged only for his condition to take a plunge.

It was learnt that he even received some members of his family Wednesday in the hospital and walked around his isolation area to show his fitness.

Members of the family were said to be expecting his discharge on Friday.

The complications in his health were said to have arisen from diabetes and respiratory tract infections.

It was also   learnt that the late Chief of Staff neither consulted the Presidential Task Force on the campaign against COVID-19 nor the Nigeria Centre for Disease Control (NCDC) deciding on private treatment in Lagos.

Officials of PTF and NCDC only read the announcement of his relocation to a private hospital in Lagos like other Nigerians.

It was gathered that he did not avail himself of expertise advice by NCDC and medical teams.

A source said the family was confident that Kyari would survive the Coronavirus Disease.

The source said: “As at Wednesday, Kyari was seen walking round his isolation area when some members of his family came on a visit. His health improvement gave a ray of hope that he was fast recovering.

“In fact, words had gone round to his relations that he might be discharged on Friday. But he died following relapse, occasioned by diabetes and respiratory tract infections in the evening of Friday. How his condition changed for the worse shocked all the medics around him. He died between 9pm and 10 pm.

“So, he died of COVID-19 and underlying factors or complications.”

The statement said: “Following enquiries on the passing away of the Chief of Staff to the President of the Federal Republic of Nigeria, Mallam Abba Kyari on Friday 17th April 2020, the Lagos State Government states that:

“As a basis for accreditation, First Cardiology Consultants established a separate specialist wing with staff dedicated to the treatment of complicated cases of COVID-19, under the supervision of the Lagos State COVID-19 emergency response team.”

Newsthumb was also told that the late Kyari did not consult either the Presidential Task Force (PTF) on COVID-19 or the Nigeria Centre for Disease Control (NCDC) before opting for personal treatment.

A top source said: “We read his statement on his decision to move to Lagos for private treatment like every Nigerian. He did not seek any advisory from the PTF and NCDC.

“And since he said he did not want to overburden the public health sector, we allowed him to have his way. We could not have stopped him because it was a private health option and he went to a designated hospital for COVID-19 treatment.

“We respected his decision because of underlying health challenges he had which he wanted the hospital to manage with COVID-19.

“It was not the Federal Government that took him to the First Cardiology Consultants hospital in Lagos.

“In essence, he was not NCDC patient in the real sense of it.”

Two Sports Utility Vehicles (SUVs) with plenty policemen and two ambulances were seen Friday evening at First Cardiology Consultant (FCC) Hospital in Ikoyi, Lagos State, the private facility where Mallam Abba Kyari died, The policemen, according to witnesses, were later allowed into the hospital through the back gate.

It was gathered that the massive presence of policemen in the usually calm neighbourhood, raised anxiety among the people and suspicion that a top government functionary was in a critical condition.

Newsthumb gathered that the policemen who were inside the SUV, alighted at the front gate, went inside and later returned with some officials to lead the vehicles through the back gate.

Investigation showed that Kyari’s presence in the hospital was treated with topmost secret.

From the main entrance to the hospital, it was observed something unusual occurred as the guards were very suspicious of movements around the facility.

At the gate, a notice indicating that the hospital does not handle COVID-19 cases was clearly pasted while visitors were notified of conditions to meet before entry can be granted.

Some relatives of patients were seen waiting inside their vehicles outside while a fruit seller displayed his wares inside a barrow just by a tree between the hospital and the British Council.

A woman who spoke to  our correspondent said they saw the SUV between 3pm and 4pm when they brought in her aunt.

She said: “We saw a lot of police people who came in two SUVs and there were also two ambulances with them. They were let in through the back gate. We did not know the person they came for but it was obvious it must be a top government person.

“This hospital does not allow visitors in. They do not even allow relatives of patients to come and stay with their loved ones. They only give you five minutes for visiting and after that, you come out.

“People are screened before they go in and they make it clear that they do not treat COVID-19 patients. Before they took our relative who had difficulty breathing and was on oxygen, we were asked to go for COVID-19 screening first.

“It takes three days for the result to come out and we had to wait. It was when the result came back negative that they accepted to treat our relative.

“So, people are surprised to discover now that Mallam Kyari who was publicly known to have COVID-19 was admitted here.”

A security man corroborated the woman’s story, adding that they were yet to understand what happened yesterday.

“It is true we saw so many policemen who came inside two SUVs on Friday evening. But we do not know what they came for. This hospital is very big and those who come here are rich people. As I am out here, I do not know what transpires inside and I cannot go and ask questions that could be suspicious,” he said.

When our Correspondent contacted the hospital on telephone after access to the premises was denied, it denied Kyari died in their  hospital.

“Abba Kyari neither received treatment nor died in our hospital,” a front desk worker who picked the telephone echoed.

The Head of the EU Delegation to Nigeria and ECOWAS Ambassador Ketil Karlsen, said he was “deeply saddened to hear about the passing of Abba Kyari.

“My thoughts are with his family. He became a friend and was an inspiration with his passionate approach to development of Nigeria in general and the north in particular. May his soul rest in eternal peace.”

The Nigerian Supreme Council for Islamic Affairs (NSCIA), in a statement by its Secretary-General, Prof. Is-haq Oloyede, said Kyari was an excellent administrator.

It said: “The Nigerian Supreme Council for Islamic Affairs (NSCIA) under the leadership of its President-General and Sultan of Sokoto, His Eminence, Alh. Muhammad Sa’ad Abubakar, received the news of the death of Alh. Kyari with great shock.

“The late Chief of Staff was an excellent administrator who was committed to the overall development of the nation through dedicated and loyal service not only to President Muhammadu Buhari, but also to the Nigerian nation.

“The Nigerian Supreme Council for Islamic Affairs commiserates with the President and government of Nigeria on this grievous occasion.

“It is the prayer of the Ummah in Nigeria that Almighty Allah would grant the departed Chief of Staff Al-jannah Al-firdaus. Amin.”

On his part, Senator Mohammed Ali Ndume yesterday commiserated  with the family, the Presidency, the people of Borno and the nation at large over the death Malam Abba Kyari.

While submitting to the will of Allah, Senator Ndume described Malam Abba Kyari’s death as shocking.

He said: “His wise counsel will be missed at such trying times.  The loss of Malam Kyari who died in active service is a national tragedy and his innumerable contribution to nation building will always be remembered.

“I pray to Allah to shower His mercy on the soul of the deceased and give his family, the Presidency, Borno and the nation the fortitude to bear the loss.”

He urged Nigerians to adhere to the rules and regulations of the much dreaded Covid-19 as released by the NCDC in other to ensure a healthy nation.