I am not ready to dump APC – Kalu 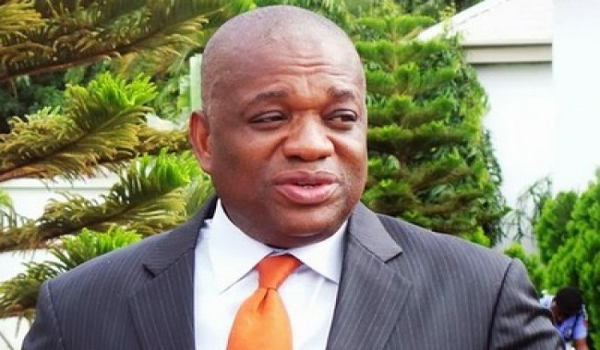 …..Says crisis in party will be resolved

Former Governor of Abia State, Dr Orji Uzor Kalu on Wednesday said he is not ready to defect from the ruling All Progressives Congress (APC), because it is not moral for politicians to move from one party to the other preparatory to every election circle.

He said people who are afraid of losing election in Abia State are responsible for spreading falsehood about loyalty to the APC.

Kalu, however spared a thought for the ongoing EFCC trail, affirming that he will challenge the “No Case Submission “, at the Court of Appeal.

He said he remains in the ruling party to deepen democracy, because only politicians who see politics as a do or die affair, that move from party to party

Speaking to reporters at a private terminal at the international wing of the Lagos Airport, Kalu described as ‘capital naked fallacy’, insinuations that he was returning to the People’s Democratic Party (PDP).

He however described the gale of defections from APC to PDP, as an unhealthy development that is though driven by choice, but not good for democracy.

Kalu said: “I am not leaving the APC. That is what l will call a capital naked fallacy; l am not going back to PDP. I left PDP  since 2006 and l have never been back, l have been a member of Progressives People’s Alliance  before l  joined APC when l found out that Nigeria has gone to two party systems. “Honestly going back to PDP is not really an option for me. I will rather go to my farm in Igbere and farm. I don’t think there is any truth in the rumour. It is just people who knew that they are already losing Abia because they no they will lose Abia with me standing.”

Kalu, however, spared a though for the gale of defections hitting the ruling party, saying the development calls for caution, by the leadership of the party.

He said “We are in trouble. Anybody saying APC is not in trouble is not saying the truth but we will come out of it,  but you see the President has remain like a true leader and father of all that he is, you have not seen him abuse  anybody. Defecting and not defecting is a question of choice.  We acknowledge we have a problem and we are going to fine-tune a strategy to resolve it.”

“It is the choice of the senate president to defect. You know we are all friends. He left PDP before to come to the APC. What l don’t like about the defection is that it shouldn’t be a recurring decimal whereby at any slightest thing, we jump to another political party.

“Saraki father was my father; l was like his first son. I cannot speak ill of him. He has made his decision and l cannot stop him that will not stop me from going to his house to eat food. The other day l was in Atiku’s house but l am a core supporter of Buhari. People are just playing politics as if it is a do or die affair. One thing is clear, by 2019, one person must win this presidency not two people.”

He said it is not moral to condemn the Senate President, Dr Bukola Saraki for defecting to the PDP, because the Chairman of the APC, Comrade Adams Oshiomhole is already addressing the issue.

Kalu said “I think Chairman Oshiomhole is looking at that and he will come out policy that we will present at the national executive committee of the party. The leadership of the party is looking at the present solution. Rome was not built in a day. PDP was a party formed barely 20 years ago and APC is just 3 years old so there must be fighting just like we saw in the early days of PDP up till 2006 we were fighting.

“People like me were deregistered from my pdp but l didn’t leave PDP, we were de-registered by Obasanjo, myself, Atiku,  Boni  Haruna and the and rest. It is a continuous thing but l want people to be patient, we would be able to get what we  are looking for but if not we wont get to our desired destination because political processes evolves over time. I keep  saying that in political development, the hardware is not the selling point, successes of any political development is  the software. The software means obeying the rule of law.”

Kalu, said the “No Case Submission “, will be addressed at a court of higher jurisdiction.

He said “You saw on Wednesday l lost the case of my no case submission in the court and l am not abusing the judge talk ill of the judge, that was the opinion of the judge and l am going to a higher court to seek appeal and even go to the Supreme court where l will seek the opinion of another jurist. This is what l preach to government, individuals, corporations that we must obey the rule of law. Unless everybody sees a lion from the same point that it is a lion. I want to advice that government at all levels and individuals should start obeying the court record. Once we obey the laws of the court and those of the land, we become freer.”

Kalu said his interest in running for the Abia North Senatorial Seat, under the platform of the APC, is to smoothen the relationship between the legislative and executive arms of government.

He said “My interest has always been to be relevant politically and what l am going to do for the people of Abia north and Nigeria generally. I am going to be a very strong voice in the senate by making a lot of difference like l did when l was in the House of Representatives, in the aborted Third Republic. I was the one who sponsored the bill that was passed into law for dual citizenship of Nigerians which was the only bill that Babangida signed as a president.

“I am going to also unfold a lot of things that will first come to my constituency in Abia north so that they will now know that they have a senator representing them; secondly the Abia people will know they have a voice of a vibrant senator and then Nigerians. I will work across board in the six geo-political zones to formulate policies on education, healthcare. Education remains the most important gift any government should give its citizens.

“I am also going to be formulating on agriculture. My duty is to work with the President and ensure a cordial working relationship with the executive and legislature. It is only when we have such relationship that progress is made. I employ today 9, 000 workers in Nigeria, l am going to bring my management skill to bear on the discharge of my duties.”

The former Abia State Governor, however lauded government on the proposed national carrier, Nigeria Air, describing it as one of the best decisions taken by the government.

He said “The government has done fantastically what l believe should be done. It should be replicated in the rail, waterways, shipping line and others. Govt. should just owe five percent. I must praise the minister of state for aviation and the people that put the structure that is making waves today. Those structures are solid ones and if they can maintain it, Nigeria Air will compete with other foreign carriers that dominate our airspace. I laud the good initiative for a country like Nigeria spending all our money on foreign airlines; it is good we have a strong dominant airline back up by government.

“Ethiopian airlines is still own by government. I maintain all my aircraft with them so l know that they are capable of doing. Government should not event stop at that, they should allow the private sector initiative to go into the new shipping line and others.

“Those criticizing it never knew that it is only true government that you can build a strong economy. It is only when government invests in economy manage by private sector that we can have moved forward.”