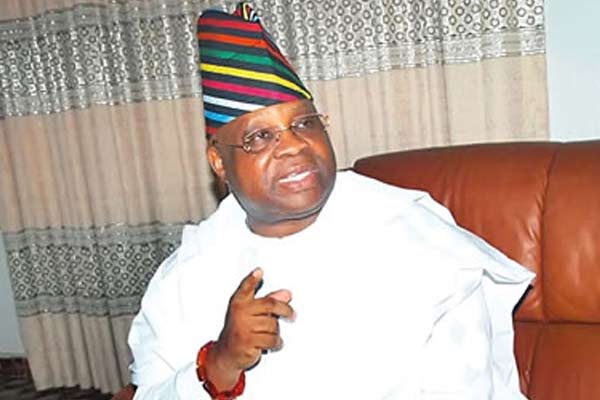 The candidate of the Peoples Democratic Party (PDP) in the last governorship election in Osun State, Senator Ademola Adeleke has vowed to challenge, before the Supreme Court, Thursday judgment of the Court of Appeal, Abuja.

Adeleke, representing Osun West Senatorial district, said: “I received with dissatisfaction the judgement of the Court of Appeal on the ruling of the election petition tribunal which had duly returned me as the validly elected governor of Osun state.

“I have subsequently instructed my counsel to prepare for an appeal against today’s judgement at the Supreme Court immediately.

“Today’s judgement relied on weak technical foundation. The substantive issue which formed the basis of the lower tribunal judgement was relegated to the background.

“We are reviewing the full ruling and action has already commenced to appeal the judgement and ensure the eventual retrieval of the stolen mandate.

“To the good people of Osun state, don’t be downcast. The struggle for good governance and retrieval of People’s mandate cannot be truncated by any flawed judgement. We are taking the legal battle further to the topmost court in the land. I am confident the apex court will upturn today’s unsustainable ruling.

“To all members of PDP in Osun State and my campaign Organisation, the struggle is now at the most critical stage.

“We cannot waiver nor slow down. We must forge ahead in high spirit until final victory is attained. In this endeavour, I promise to provide the leadership as the genuine governorship mandate holder in Osun state.

“My good people of Osun state, I know the pain and suffering you are passing through. The move to reclaim your mandate is still very much alive despite the jaundiced ruling of today.

“We will not abandon the mandate you freely conferred on us. We will deploy all legal means to retrieve the stolen mandate.

“I appreciate the massive support from home and abroad. We shall triumph at last.”