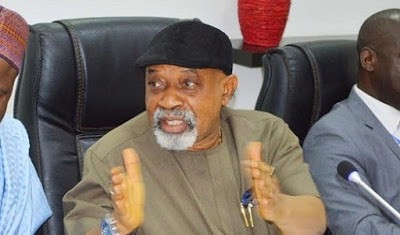 The Nigeria Labour Congress (NLC) has directed workers in the nation’s airports and workers in the 163 countries that are members of the International Trade Union Confederation to subject the Minister of Labour and Employment, Senator Chris Ngige to ridicule for inviting thugs against workers on a “lawful protest” to his house.

Rising from its Central Working Committee meeting on Thursday evening, Congress demand what it called unreserved apology from the Minister for his action, while asking the government to ensure that the Minister was not reappointed into the next cabinet of the President.

President of Congress, Comrade Ayuba Wabba told newsmen after the meeting that the actions of the Minister was a clear indication that he was not fit to occupy public office and should therefore not be reappoint to government.

Wabba said the Minister has no right to change the appointment made by the President on the excuse that he never recommended Chief Frank Kokori to head the NSITF board, adding that the real reason he is opposed to Chief Kokori was because the veteran labour leader cannot be compromised.

He said further that since the Minister has been talking about the issue of corruption in the NSITF, the government should putt in place a judicial commission of enquiry to investigate the agency so as to unravel who the actual corrupt persons are.

Wabba said even after the EFCC investigation into the financial activities of the previous board in which a Permanent Secretary in the Ministry was charged, its representatives on the NSITF board were never found wanting, saying “who are the actual corrupt people in NSITF? Is the board that has not been inaugurated or it is the Minister?

He maintained that the NLC has sent messages to all workers in the 163 countries who are members of the ITUC to embarrass the Minister and members of his family anywhere they are seen, especially at airports where workers operates.

On criticism that has trailed the decision of congress to picket the Minister’s residence, he said “Ngige is a public officer, holding public office. Untill he leaves office, even his house is a public place. Even Presidents of the world have been picketed in their houses. In any case, we did not access his house. We were only on the street.

“In any case, he has abandoned his office and has been operating from his house. The house has been his second office for some times now and he has been avoiding any place where he will come in contact with us.

“We insist that the money in NSITF belong to workers because it is a contribution of employers to take care of the social needs of their workers. That is the only reason why Labour and NECA have two members each on the Board. Even the Ministry of Labour have only one member.

“So, we are demanding that the Board heeded by Kokori be inaugurated and all the thugs who attacked us in the full glare of security agents be investigated and prosecuted. We are actually surprised that nothing has been done so far”.

Wabba however said that the national protest will be restricted to Abuja for now and ask all affiliates and state councils to begin to mobilise their members ahead of the protest.