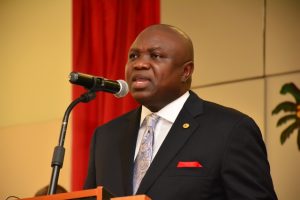 As a way of integrating secondary school students as an important socio-economic group towards attaining the vision for Greater Lagos, the Lagos State Government, in partnership with Entertainment Media Limited, Publishers of E24-7 Magazine and FlipTV, are organising an annual Lagos High School Band Challenge (LHSBC).

The challenge, according to the conveners, is designed to be a live music competition among secondary school students in Lagos in both public and private schools across the state’s five educational and administrative divisions.

The Ministry of  Tourism, Arts and Culture in a letter of endorsement noted  that the Governor Akinwumi Ambode-led administration “values the intention of Entertainment Media Limited to organise the Lagos High School Band Challenge, a secondary school focused talent hunt competition designed to promote the knowledge of live music and performance using musical instruments among students.”

He further noted that the project is a Pan-Lagos Initiative that will involve Secondary School Students in both public and private schools across the five divisions of the state.

“There will be the elimination stages, the quarter-final, semi-final and the grand finale where prizes will be won. The grand finale is scheduled to hold in June on World Music Day,” he added.