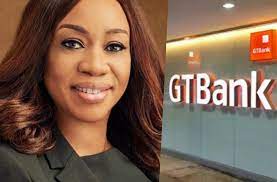 Miriam Olusanya, the newly appointed first female Managing Director of one of Nigeria’s leading banks, GTB, is currently enmeshed in a messy tale.

According to the tale which is gradually gaining traction, her marriage to Abiodun Olusanya just crashed. And to compound her woes, one of the reasons being alleged is not palatable.

We learnt that her fed up husband, Abiodun, had on January 23, 2020 filed a petition for the dissolution of their marriage before a Chicago court in the United States of America.

Factoring into the equation the fact that both had been living apart for years, and coupled with the allegations of infidelity and other things, the court, after examining all the exhibits tendered, granted the plaintiff’s prayers.