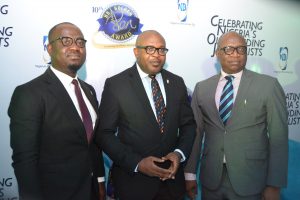 Nigerian Breweries Plc has restated its commitment to excellence in the practice of journalism as the 10th edition of the Nigerian Breweries Golden Pen Awards opened with a promise to honour journalists who abide by the fine ethics of the profession.
Kufre Ekanem, Nigerian Breweries’ Corporate Affairs Adviser affirmed that the Golden Pen Awards has greatly impacted the role of the press in the socio-economic development of Nigeria.
He added that since its inception, the award has produced nine grand prize winners in the Journalist of the Year category, six grand prize winners in the Photo Journalist of the Year category and four others in the Report of the Year category. It has also produced several runners up in the three categories.
“Looking back over the last nine editions, we are happy that the initiative has continued to help improve the quality of journalism in Nigeria going by the quality of entries we receive every year as attested to by our independent panel of judges and stakeholders in the Nigerian media who have been part of the awards over the years,” he said.
Ekanem disclosed that in this milestone 10th edition, the company is again directing the attention of the Nigerian media to the area of Agriculture, Local Sourcing and Industrial Development as the theme for the Nigerian Breweries Golden Pen Award. “As a company committed to Winning with Nigeria, we believe that the focus on Agriculture, Local Sourcing and Industrial Development is key to making our country achieve her full potential as a self –reliant and developed country with a diversified economic base, he added.
According to him, entries for the award opened on Wednesday, June 13, 2018 and will close on Friday, July 13, 2018. He enjoined journalists from all media platforms with reports published in 2017 and focusing on Agriculture, Local Sourcing and Industrial Development to avail themselves of the opportunity presented by the Award. A maximum of three entries is allowed per journalist.
All entries he said, should be sent to TPT International via goldenpenawards@tptinternational.com or the corporate address on PR Place, 6/8 Bola Ogunsanya crescent, Magodo GRA, Shangisha, Lagos. While encouraging journalists across the country to participate.
Ekanem informed that for this 10th edition of the award, the Nigerian Breweries Golden Pen Reporter of the Year will get a cash prize of N2 Million Naira plus a gift item; the first runner up will get N1 Million Naira while the 2nd runner up will go home with N750 Thousand Naira.
In the Photojournalist category, the overall winner will receive N1 Million plus a gift item while the first and second runners up will be rewarded with N750 Thousand Naira and N500 Thousand Naira respectively. The winner of the Nigerian Breweries Golden Pen Report of the Year will receive N1 Million and a gift item.
In his testimonial, the 2017 winner of the Nigerian Breweries Golden Pen Report of the Year, Mojeed Alabi, expressed appreciation to Nigerian Breweries for recognizing journalists and rewarding excellence in the media profession.