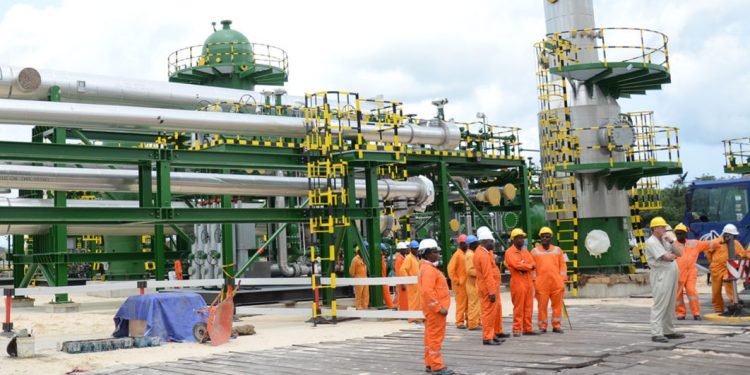 THE Nigerian National Petroleum Corporation (NNPC) has recorded an increased trading surplus of ¦ 20.36billion in July 2020 compared to the ¦ 2.12billion surplus in June 2020 in its operations.

Its Group General Manager, Group Public Affairs Division, Dr. Kennie Obateru,, in a statement explained that details of the figures captured in the July 2020 NNPC Monthly Financial and Operations Report (MFOR) indicated that the 858 per cent overall upswell in performance was largely due to the 178 per cent rise in the surplus posted by the Nigerian Petroleum Development Company (NPDC), NNPC’s flagship upstream entity.

He stated that the NPDC’s impressive result was bolstered by the continuous improvement in global crude oil demand for the third consecutive month.

Similarly, the report said the corporation’s fortune was further enhanced by the 739 per cent increased profit posted by the Integrated Data Services Limited (IDSL) and a 51 per cent growth in performance by Duke Oil Incorporated, both companies of NNPC.

Returns from NNPC Retail Limited and Nigerian Gas Marketing Company (NGMC) during the period under review also grew by 28 per cent and 24 per cent respectively, owing to increased sales and improved debt collection.

In the Gas sector, Gas production in July 2020 increased by 2.19 per cent at 236.34billion cubic feet (BCF) compared to output in June 2020; translating to an average daily production of 7,623.98million standard cubic feet of gas per day (mmscfd). Likewise, the daily average natural gas supply to gas power plants stood at 707mmscfd, equivalent to power generation of 2,421megawatt (Mw).

Period-to-date Production from Joint Ventures (JVs), Production Sharing Contracts (PSCs) and NPDC contributed about 70.88 per cent, 20.37 per cent and 8.75 per cent respectively to the total national gas production.

In the Downstream Sector, to ensure continuous stability in Premium Motor Spirit (PMS) supply and effective distribution across the country, 1.02billion litres of PMS translating to 32.95mn liters/day were supplied for the month.

The July NNPC MFOR stated that the corporation has continued to diligently monitor the daily stock of PMS to achieve smooth distribution of petroleum products and zero fuel queue across the Nation.

The report noted that during the period under review, 36 pipeline points were vandalized, representing about nine per cent increase from the 33 points recorded in June 2020.

Atlas Cove-Mosimi and Aba-Enugu network accounted for 28 per cent each, while PHC-Aba and the other locations recorded 14 per cent and the remaining 31 per cent respectively. NNPC in collaboration with the local communities and other stakeholders continuously have strived to reduce the menace of pipeline vandalism.

The July NNPC MFOR is the 60th edition in the series meant to sustain effective communication with stakeholders.

The report is published monthly on the corporation’s website, national dailies and online media.