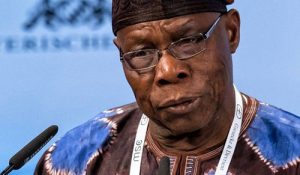 Several presidential aspirants in the Peoples Democratic Party (PDP) and the All Progressives Congress (APC) are currently assessing how the Olusegun Obasanjo-inspired Coalition for Nigeria Movement (CNM) might bolster their chances.

However, some PDP leaders and governors are angry with the former president for allegedly trying to lure into the CNM party members who are  aggrieved against the new leadership of the PDP headed by Prince Uche Secondus.

Multiple sources said the coalition is already plotting against 11 APC states to pave the way for any presidential candidate it might adopt, and may pick a one time National Chairman of the PDP, Colonel Ahmadu Ali, to lead it.

Apart from the likes of former Osun State governor, Prince Olagunsoye Oyinlola and ex-Cross River State Governor, Donald Duke, no politician of note has openly identified with the CNM since it’s unveiling in Abuja on Wednesday.

Obasanjo, during his registration as a member of the coalition in Abeokuta on Thursday, said it was not yet a political party and that he would withdraw once it did.

It was gathered that some politicians who have an eye on the presidency in next year’s election are considering how they might profit from the coalition.

But they are waiting to see how it evolves and what influence it could wield.

Known friends of Obasanjo, including Ahmed Makarfi, Rabiu Kwankwaso and Sule Lamido are treading cautiously in their attitude to the CNM.

Former Senate President, David Mark, is said not to be keen in joining forces with the  coalition.

A source familiar with the situation said: “I can tell you that some APC governors like Aminu Waziri Tambuwal and PDP leaders, including presidential aspirants like ex-Vice President Atiku Abubakar, Sen. Ahmed Makarfi, Rabiu Kwankwaso, Sule Lamido, Ibrahim Shekarau and others are really weighing options before pitching tent with the CNM whose direction is still confusing a year to an election.

“It is only Shekarau who has told Obasanjo that he cannot leave PDP under any circumstance for CNM. Obasanjo had invited Shekarau penultimate Wednesday to his place and the ex-governor spent a night with him.

“By Thursday morning, Shekarau made it clear that he would not be part of CNM no matter the bait.

“He however restated his respect for the ex-President. But he told Obasanjo his readiness to seek the presidential ticket of PDP and pleaded for the support of the statesman.

When contacted last night, a close source to Shekarau said: “Our principal will remain in PDP; he won’t be part of Obasanjo’s coalition at all.”

A trusted strategist of Kwankwaso also said: “In as much as Kwankwaso is in favour of a mass movement, he still prefers shifting base to a stronger party like PDP if President Muhammadu Buhari shows interest in APC presidential race. But Kwankwaso has no problem working with Obasanjo, who is his hero.”

A source in Atiku’s camp said: “Our focus right now is on PDP primaries. If there is need for alignment later with anyone or movement; when we get to the bridge, we will cross it. Don’t forget that APC was also a product of a mass movement and realignment; Atiku will never be opposed to such if it is desirable.”

A source in Makarfi’s group said: “We are expecting the PDP governors and leaders to appreciate the worth of our principal and concede the party’s presidential ticket to him.”

A strategist of Tambuwal said: “While we appreciate Obasanjo as a statesman, it is not yet time for politics or joining any movement.”

A reliable ally of Lamido said: “The ex-Governor of Jigawa State is a party man; he will stick to PDP no matter the outcome of PDP presidential primaries. In 2015, Obasanjo did his best to woo Lamido to APC but he refused. So, I don’t see him joining this movement. “

Findings also revealed why PDP leaders and some APC governors had been cautious.

A top source added: “What is not helping matters with CNM is the hidden agenda of the coalition of Obasanjo.

“Some PDP leaders were told by a few sympathizers of CNM that the ultimate plan is to rely on PDP structure as the main opposition party, woo some APC governors, Senators and members of the House of Representatives, and foster alliance with a few parties to apply for a change of name from the Independent National Electoral Commission (INEC) for the new merger party. The name will reflect a combination of PDP and others.

“Having torn PDP membership card, some of the leaders cannot understand why Obasanjo will seek to use its coalition to lure its leaders and members. The CNM wants to destroy PDP and build a new one from its rubbles.

“The CNM has a dangerous game-plan which will lead to the hijack of PDP from the governors of the party led by Nyesom Wike and the new generation of leaders.”

The source added: “What is painful is that in forming the coalition, Obasanjo has drawn some aggrieved PDP leaders to himself instead of those in the leadership of the party who he refused to contact. Instead in his letter to President Buhari, he was accusing the party of procuring judgment at the Supreme Court.

“As a party, we are keeping records of what the CNM is up to with our leaders. We believe in reconciliation and we are working towards it. But if some of these leaders prefer CNM, good luck to them.”

Some CNM leaders were shocked that the coalition took off on a shaky note because of last minutes change of mind by some PDP leaders and APC governors who had assured Obasanjo of their support.

The affected subscribers to CNM had a rethink and stayed away from the maiden launch in Abuja because most of them were unsure of how the coalition can guarantee them elective positions in 2019.

Others claimed that it was “premature “to take any gamble with the coalition because 2019 politics is just manifesting.

It was learnt that the initial plan to make the coalition to take off with “frenzy” failed as plan with the absence of the affected leaders who had planned to be at Shehu Musa Yar’Adua Centre.

It was gathered that the development informed the relaunch of the CNM, under the guise of membership registration by ex-President Obasanjo, on Thursday in Abeokuta.

Sources said that Obasanjo’s long standing ally and former National Chairman of PDP, Sen. Ahmadu Ali, may lead the CNM as chairman in view of his experience in ‘garrison politics’.

Meanwhile, there were fresh indications yesterday that Obasanjo’s coalition is in a secret plot against 11 APC states in order to pave the way for any presidential candidate it might adopt.

“The coalition wants to capitalize on some challenges in some of these states to effect change in leadership. The initial test of the coalition’s campaign will be during the forthcoming Osun and Ekiti governorship polls. The permutation is that once it is able to mobilize the masses to dislodge APC and PDP, the coalition would have effectively taken off.

“The template in Osun and Ekiti will now be used for the other nine states. The APC leaders are however aware of the plot and a counter-plot has started, beginning with the responses of Asiwaju Bola Tinubu and ex-Governor Adams Oshiomhole to Obasanjo on his letter to Buhari.”

As at press time however, findings confirmed that most foreign missions have opened desks to monitor the potency of CNM and the emerging political scenarios in the country.

A diplomat said: “Your country is undergoing an interesting political time, we are all watching. Our home countries are really interested in what will become of Obasanjo’s project, especially if it will have impact on your country’s politics.

“We want a robust and stable democracy and peace for Nigeria.”