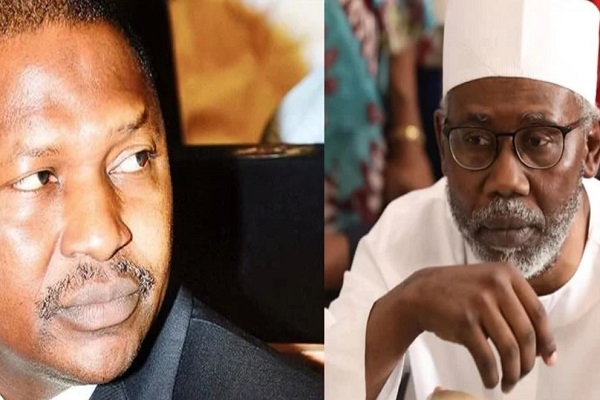 A former Attorney-General of the Federation Mohammed Adoke (SAN) yesterday faulted what he described lies against him in the Federal Government’s case against J.P Morgan before an English court.

In a March 3 letter to his successor Abubakar Malami (SAN) through his lawyer Paul Erokoro (SAN), Adoke said it was not possible for the AGF to be unaware that lies were being told about him in the proceedings.

According to Adoke, the Nigerian government, in explaining how he allegedly benefitted from the OPL 245 deal, informed the court that he contacted JP Morgan through phone calls and email.

Adoke told Malami that grave injustice would be done him if urgent steps were not taken by his office to properly inform and guide the English court on the facts needed to assist it to arrive at a just determination of the suit.

He said the AGF has a duty to bring to the court’s attention all exculpating circumstances, including a Federal High Court judgment exonerating him in the OPL 245 resolution Agreement of 2011; the outcome of a police investigation which had indicted Olanrewaju Suraju of forgery, and the fact that the AGF’s office filed charges against Suraju for forgery of the email that had been falsely sent in Adoke’s name.

Adoke also asked Malami to supply the evidence given by prosecution witnesses to a Nigerian court that he (Adoke) did not corruptly enrich himself in the implementation of the OPL 245 Resolution Agreement, and that the N300m that was in issue had been proven to have been a mortgage transaction between our client and Unity Bank of Nigeria, amongst others.

The former minister absolved himself of any complicity in the case.

“Our client is concerned that you, the Attorney-General of Nigeria, have instructed counsel in England to the above effect or have allowed those instructions to be given, or allowed those ‘facts’ to be presented in a court of law, when you are fully aware that they are not true,” Erokoro wrote.

Adoke recalled that Malami, on September 20, 2017, had written the Economic and Financial Crimes Commission (EFCC) Acting Chairman on the Malabu case to inform him that “investigation and attached proof of evidence does not appear to have clearly revealed the case of fraud against the parties…”

He also recalled that in Malami’s letter to the President on September 15, 2017, he had also advised that the matter “be resolved in the national interest thereby saving the nation from acrimonious litigations resulting in high legal fees and the dormancy of the oil field while litigation lasted”.

The former minister noted that the Federal High Court, relying on Malami’s letter to the EFCC Acting Chairman, declared that Adoke’s involvement in the negotiations leading to the implementation of a Settlement Agreement between Malabu Oil & Gas Limited and the Federal Government and the eventual execution of Bloc 245 Malabu Resolution Agreement dated 29th April 2011 “was in furtherance of the lawful directives/approval of the President in the exercise of his executive powers.”

“As you are well aware, the FGN did not appeal that judgment, the legal implication being that the judgment represents the truth of the matters that it decided, for all time,” Adoke said.

On the allegation of bribery against him, Adoke noted that an Italian Court had discharged and acquitted all defendants involved in the OPL 245 Resolution Agreement case.

Besides, Adoke said Malami had given the government similar advice he (Adoke) gave in the past.

His lawyer wrote: “Our client finds it remarkable that you are portraying him as corrupt for giving the same advice that you have so wisely given the government.

“Surely, you would not expect a future Attorney-General to say that you too were corrupted by Malabu since you gave the same legal advice that had earlier been given by our client.

“There can be no doubt that you did the right thing in advising the government to bring the Shell/Malabu dispute to a tidy close so that Nigeria can earn the huge revenue promised by the OPL 245 Oil Field.

“There is no fraud whatsoever in your legal advice on this point, just as there was none in our client’s.”

Adoke said it was unjustifiable for Malami to allow his successor’s name to be “dragged in the mud in an effort to deceive a foreign court into believing that our client had acted corruptly”.