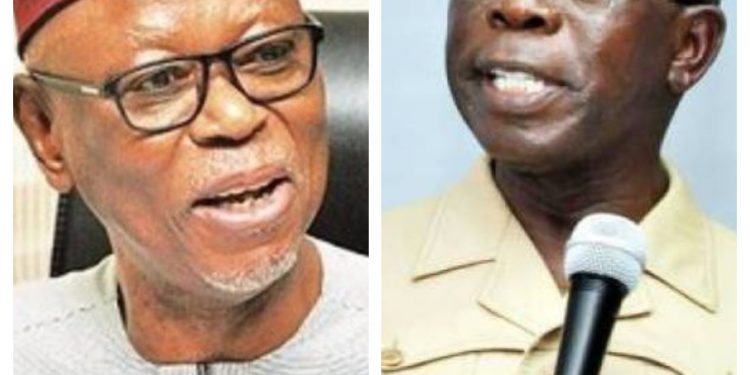 THE war of words over the crisis rocking the Edo State House of Assembly continued yesterday, with former All Progressives Congress (APC) National Chairman John Odigie-Oyegun and his successor, Adams Oshiomhole, throwing darts at each other.

Odigie-Oyegun, through his Public Affairs Adviser, Chief Ray Morphy, accused the APC National Chairman of turning himself into an agent of disruption, trying to frustrate the smooth running of government in Edo State.

But Oshiomhole fired back, urging the elder statesman to stop speaking through a lackey, but to come out himself and address the issues at hand.

Oshiomhole’s reaction to Odigie-Oyegun’s scathing in a statement by Morphy was by made by Oshiomhole’s Chief Press Secretary (CPS), Simon Egbebulem.

Egbebulem said that the APC chair has so much respect for Odigie-Oyegun and so, would not comment on his statement.

He said: “I have no comment. Chief Oyegun is a respected leader of the party and an elder statesman. Comrade Oshiomhole has so much respect for him. If he really wants to address Oshiomhole, he can come out openly and address the man who succeeded him in office and not one Morphy.”

In the statement by Morphy, the former APC chairman accused Oshiomhole of playing god in Edo politics even though he claimed to have buried godfatherism in the state.

He urged him to stop disgracing the APC in Edo State through the ignoble role he is playing in fueling the crisis in the state, adding that he was yet to come to come to terms as to why Oshiomhole has easily forgotten that he never interfered in the state’s affairs as the national chairman of the ruling party while he held the fort as the then governor.

Odigie-Oyegun also wondered why, according to him, the APC national chairman forgot that Obaseki should be supported as the only APC governor in the Southsouth geopolitical zone rather than being vilified and his administration destabilised.

The statement said Odie-Oyegun was reacting to Obaseki’s accusation of Oshiomhole of being behind the crisis rocking the House of Assembly.

He said that the APC chairman was “blatantly and brazenly engaging in anti-party activities to the extent that the party in Edo is now riven with confusion and division”.

He said: “The recent outburst by Governor Obaseki and the report by the House of Representatives ad-hoc committee, indicting the current National Chairman of the APC have confirmed my earlier claim that Oshiomhole is not only the architect, but also responsible for fuelling the crisis in Edo State.

“In the face of these confirmations, I want to urge Oshiomhole to stop disgracing the ruling party and the good people of Edo State. I wonder how he could easily forget that I never interfered or bothered about how he ran the government as the then governor of Edo State all the while I occupied the position of the party’s national chairman.

“I am yet to come to terms why it has become difficult for Oshiomhole to realise that Governor Obaseki is the only APC governor in the entire Southsouth and should be allowed to concentrate in giving the people of Edo the dividends of democracy.

“It is shocking that a man who boastfully claimed to have buried godfatherism in Edo State politics could become enmeshed in playing God to his successor. Oshiomhole is not only guilty of godfatherism, but also guilty of anti-party activities, considering the ignorable role he has been playing and his shameful involvement in the whole Edo crisis.

“Rather than dissipating energy in fomenting more crises, Oshiomhole should rather concentrate on ensuring that Federal Government policies conform with the party’s manifesto and campaign promises to the good people of this country.

“I appeal to him once more to stop disgracing the governing party APC and Edo State. He should give the governor a breeding space to concentrate on doing the job of serving the people of Edo State.

“I want to also appeal to the Progressives Governors not to stand aside and watch their fellow governor hampered by a party chairman whose actions may lead to political misfortune of the party in the state”.