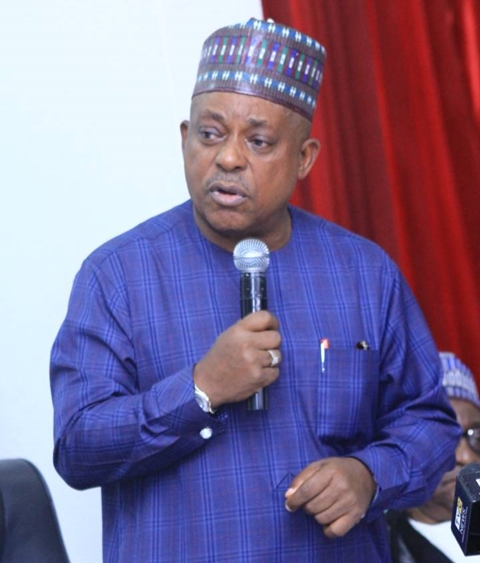 The presidential candidate of the People’s Democratic Party (PDP) Atiku Abubakar and PDP national chairman, Prince Uche Secondus, have urged the military and other security agencies not to obey the presidential order asking them to deal ruthlessly with would-be ballot box snatchers.

The party chieftains described the order as unlawful, insisting that there are enough provisions in the nation’s laws for the arrest and prosecution of ballot box snatching and other electoral offences.

Speaking at a national caucus meeting of the All Progressives Congress (APC) in Abuja on Monday, President Buhari had said: “Anybody who decides to snatch boxes or lead thugs to disturb the election, may be that would be the last unlawful action you would take.

“I have given the military and police the order to be ruthless. I am going to warn anybody who thinks he would lead a body of thugs in his locality to snatch boxes or to disturb the voting system; he would do it at the expense of his/her own life”.

But speaking Wednesday in Abuja, at the 84th National Executive Committee (NEC) meeting of the PDP, the two opposition chieftains cautioned President Buhari not to let loose anarchy in the country during the upcoming elections.

Atiku said it’s shocking for any head of state to utter such words in a democracy and that Nigerians should not accept it from President Buhari, adding “We have fought more ruthless dictators than himself”.

According to him, Buhari’s actions and utterances since he mounted the saddle in 2015 have been painful reminders of the era of military dictatorship.

“General Buhari has consistently violated the constitution; he failed to uphold the rule of law. Recent instances include the unconstitutional suspension of the Chief Justice of Nigeria a day before he was supposed to inaugurate the committee for the election tribunals that will decided any appeals or whether our elections were subject to manipulation, thereby crossing the immutable line that divides the executive from the judiciary.

“When you people are talking about democracy, I have always said that Gen. Muhammadu Buhari is not a democrat, he has never been a democrat. We started the fight to drive the military, he was never there, he never participated.

“You can see that he just wore the garb of democracy so that he can come back to power and do whatever he is doing. So Gen Buhari is not a democrat, he doesn’t believe in democracy, he is a lip service, he is more of a power monger than a democrat.

Secondus said Nigerians were still in shock as a result of the order, stressing that the same President who has been “off duty” since the needless bloodletting in various parts of the country over the years, could give what amounted to shoot-on-sight orders against ballot snatching.

Secondus said, “By that directive, ordering soldiers to kill our citizens without recourse to the law and with impunity, the President has unwittingly given license to APC leaders to carry military personnel on Saturday.

“The agenda of that directive is clear; to scare away voters and agents, that we have directed to defend their votes, so as to give way to a military protected political thugs to come into the polling booths, and implement their result replacement strategy.

“The President’s body language alongside that of his party hierarchy appeared remorseless for the damage done to our democracy or the huge private and public resources wasted by the inability of APC hawks acting as contractors and consultants to allow INEC to operate.

“I can indeed make the conclusion, that from inception, President Buhari, was not ready for free and fair elections, otherwise he would easily have signed the amended Electoral Act, which would have enabled peaceful and hitch free elections in 2019.

“President Buhari’s disregard for institutions of states, which started with the attempt of the Executive to hijack the Legislature, has continued unabated, with the illegal suspension of the Chief Justice of Nigeria (CJN) Justice Walter Onnoghen, and the swearing in of an acting CJN”.

The party chair insisted on non-deployment of military or paramilitary units to electoral duties, as, according to him, elections are civil activities, which the police are best trained to handle.

He also sought assurances from the Federal Government that all communication assets – fixed and mobile, including the Internet, will not be interrupted or compromised during the elections.

The party chair similarly urged adherence to steps taken by the government to safeguard the conduct of the elections, including restriction of movements and closure of the nation’s borders with the Republics of Chad and Niger.

The meeting, which lasted several hours, was attended by key party stakeholders, including governors, federal lawmakers, former cabinet Ministers and members of the Board of Trustees.