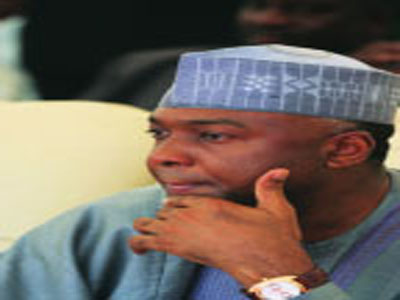 More suspects in the April 5 bloody robbery in Offa, Kwara State, have been linked with Senate President Bukola Saraki, the police claimed yesterday.

Two of the three suspects mentioned by the ring leaders in connection with the crime in which 33 people, including nine policemen, were killed, have been arrested.

He said three suspected gang leaders – Ayoade Akinnibosun, Ibikunle Ogunleye (aka Arrow) and Adeola Abraham  – followed Dr. Saraki to the palace of the towns’ traditional ruler, the Oloffa of Offa, when he visited the town after the robbery.

Moshood displayed photographs which showed one of the suspects wearing the uniform (asoebi) used during the senator’s daughter’s wedding.

Moshood told reporters that the two suspects just arrested – Alhaji Kehinde Gobiri (aka Captain) ‘47yrs’ and Alhaji Oba Shuaib Olododo (aka Jawando) ‘53yrs’  – “admitted to various crimes and criminalities they have committed in Kwara Central Senatorial District under the guise of political thuggery for the Senate President.

He added that “they are currently under investigation and will be charged to court on completion of investigation”.

Moshood said Saraki was still under investigation, adding that the police would not be deterred in their investigation- no matter who is involved.

According to him, the confessions of the suspects showed that the Senate president had a case to answer.

He said: “The Nigeria Police Force will not be cowed or succumb to intimidation from any quarter in carrying out a thorough and discreet investigation into the Offa bank robbery where significant successes have been recorded.

“The ongoing investigation will be driven to a logical conclusion.

“The Senate President, Sen. Bukola Saraki, is still under investigation in connection to the Offa bank robbery and the Nigeria Police Force will do everything possible within the ambit of the law to ensure that justice is done in this case.”

Saraki was on Monday given a 48-hour deadline to send his written response to the police on his alleged link with the boys who said the Senate president and Kwara State Governor Abdufattah Ahmed armed and funded them.

Saraki and Ahmed have denied any involvement.