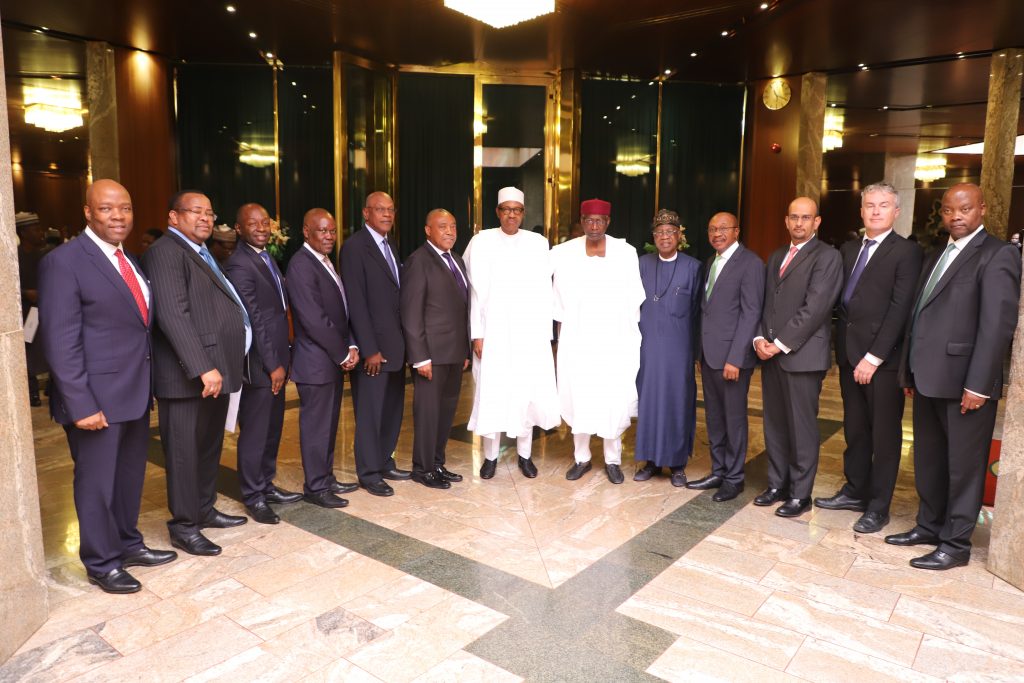 President Muhammadu Buhari has sought the collaboration of Ecobank Transnational Incorporated to “institute a special fund to develop agriculture, which will cement its legacy as a bank that helped to transform this region’s economic fortunes. Buhari spoke when he had audience with the board of Ecobank Transnational Incorporated, led by the Group Chairman, Emmanuel Ikazoboh.

President Buhari stressed that his administration remains committed to the goals of securing the country, inclusive economic growth, and fighting corruption. According to him, Nigeria was in a unique position as the most populous and resource-rich nation on the African continent, adding that the resources would be harnessed and properly managed, to engender a prosperous and peaceful country.

He said: “If assets and resources available to Nigeria were properly managed, she would be prosperous and peaceful. But the poverty and insecurity we are experiencing today are results of decades of neglect and resource mismanagement”.

Buhari said his government was not only determined to reverse the trend of squander-mania and mismanagement, “we have made progress in some areas such as agriculture”. The President commended Ecobank for being active in promoting financial inclusion, noting that it is key to the government’s diversification agenda.

On requests by the bank for the decongestion of Apapa ports, and rebuilding of the transnational Lagos-Badagry-Seme road, he responded: “We are aware and are working in all those areas, and by the grace of God, you will start seeing results during my second term in office.”

Ikazoboh who had in his delegation, the Group CEO Ecobank, Ade Ayeyemi and Managing Director, Ecobank Nigeria, Patrick Akinwuntan, called on President Buhari to urgently address Apapa gridlock, describing the port  as the center of trade in the country.

Speaking to State House Correspondents on the challenges they want the President to intervene in , the bank chief said: “Well in our speech, we have told him some of the challenges Nigeria and Africa are facing. Like I said earlier on, if Nigeria is sorted out, Africa is sorted out, and some of these challenges are infrastructure, of which they are working on assiduously. Also we are talking about the Seme road because of West African trade route which we think should be given some priority. And to thank him also for the steps he is taking to clear the Apapa Port because that is where trade is coming into Nigeria.”

The bank chief added: “The major problem confronting the bank’s today are the debtors. We have a number of debtors both corporate and individuals, and we need to put in place a framework to ensure that people do not just take loan and not pay pack. Banks are under pressure because if you have a lot of unpaid loans, it means you don’t have enough money to also support other borrowings or other small and medium enterprises.”

On what the bank was doing to support SMEs in the country, Ikazoboh said, “we’ve improved the capital of Ecobank in Nigeria. In the last six months, we have brought in about $150 million all to drive borrowings and supporting the small and medium enterprises.”

The Ecobank Group Chairman said the purpose of their visit was to “congratulate the President on his re-election and to wish him God’s guidance and spiritual protection to continue to lead this nation because we believe that he has the interest of the country at heart and if Nigeria succeeds, Africa has succeeded and being the leader of Nigeria, he is the leader of Africa. Since we are the Pan-African bank, we needed to come and see the leader of Africa.”

Ikazoboh disclosed that the Ecobank Group “with a larger African footprint than any other bank in the world operating in West, Central, East and Southern Africa is the only bank that spans 36 African countries, but operates a truly integrated African network. That is One unified integrated Ecobank Mobile Banking App, that works seamlessly across all 33 operating countries in Africa; One Ecobank Omni and Omnilite serving all Multinationals and SMEs in Africa; One Rapidtransfer app that breaks down country borders and allows the diaspora community send money directly to their loved ones, instantly and affordably across Africa; One Ecobank Online Banking platform that you can access easily whether you are in Abuja or Kinshasha; Ecobank’s unique and largest pan-African platform is designed to help unlock the opportunities of the continent, for the continent, through standardization, fuelling regional integration, and trade and investment across borders”

Further he said due to Ecobank’s sterling performance, it has been severally reconized as Best Digital Bank in Africa – 2017 by Euromoney Awards; Best Retail Bank and Innovation in Banking both in 2018 by the African Banker Awards.