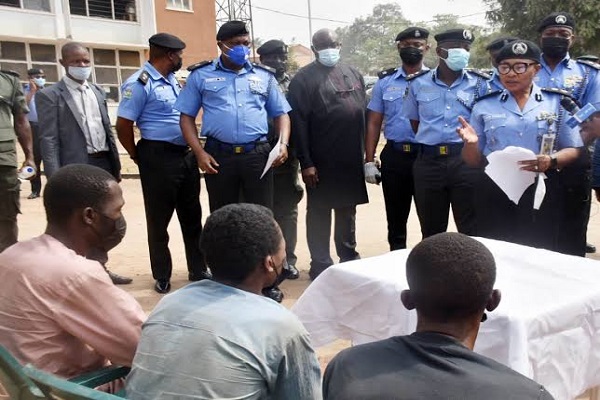 The Oyo State Police Command has arrested 12 suspects alleged linked to cases of kidnapping at Onigari in Oluyole Local Government Area on the Lagos-Ibadan Expressway.

Commissioner of Police in the state Mrs. Ngozi Onadeko paraded the suspects yesterday at the Command’s Headquarters, Eleyele, Ibadan.

The Command also paraded 20 other suspects involved in alleged conspiracy, armed robbery, murder, and impersonation as an army officer.

Mrs. Onadeko said that owing to the rising cases of kidnapping on Lagos/Ibadan expressway and murder at Onigari area of Oluyole Local Government Area on January 7, the command immediately swung into action deploying intelligence and tactical assets.

She said that the deployment at 3.30pm, on January 14, led to the arrest of one of the suspects, known as Maku-Maku, a suspected member of the gang that had been terrorising travellers on the highway.

The CP said that further investigation led to the arrest of other suspects while some were still at large.

Mrs. Onadeko said the suspects confessed to having carried out the kidnapping operations that led to the death of one Oluwatosin Anwajoye, 45, at Onigari area of Lagos/Ibadan Expressway on January 7.

One of the suspects, a commercial motorcyclist, confessed to being the one supplying the gang members food and other items.

The commercial motorcyclist said the kidnappers promised to buy him a new motorcycle after their operation.

A victim of the gang, Folahan Olaleye, told reporters that his family was coming from Lagos on December 24, 2021, at 800pm, when they were attacked and kidnapped at trouble spot.

The victim said he was shot while his daughter and pregnant wife were beaten.

He said his wife and daughter were later released, but he was held in captivity and a ransom was demanded from his family.

Mr. Olaleye said N2,750,000 ransom was eventually paid before he was released by his captors.