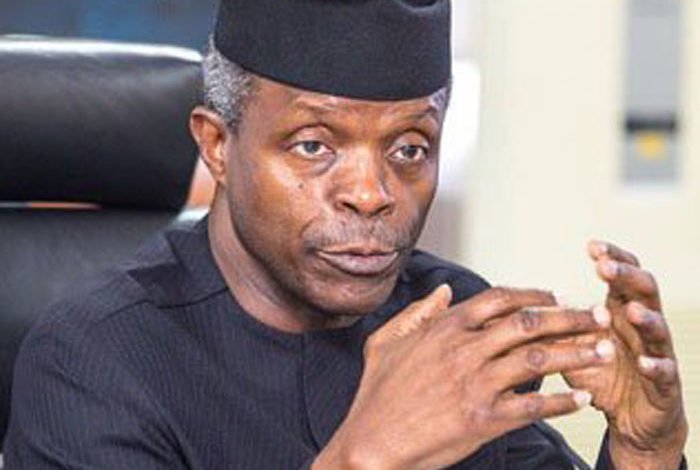 This was as he said all efforts invested overtime to fight corruption may never yield any result if not backed with severe consequences.

Osinbajo spoke at the public presentation of the Integrity Club and Zero Tolerance Club Manuals organised by the Economic and Financial Crimes Commission, EFCC, held at Model Secondary School, in Abuja.

The Integrity Club and Zero Tolerance Club Manuals is an initiative by the EFCC to serve as an instrument to inculcate the spirit of integrity and to serve as guidance in raising a more ethically grounded generation of Nigerians.

He said: “Today when you hear yahoo, yahoo, you will find out that there are people who justify it, saying it is because they don’t have money or it is because they are bored that’s why they are into it. No, that’s not true. There are many poor young people all over the world in different countries.

“The difference is the consequence. If you know that you will be caught and dealt with, you will not do it and you must also recognise that it destroys the reputation of your country and that reputation is important because you want to go abroad to study; because you want to do business abroad and do business with people. If the only thing people have ever heard is that these people are 419. If that’s the only reputation that there is, you are in trouble.

“Every public officer who steals robs the Nigerian society of funds, of health care, and education. Every time a public officer steals money whether the man is from your tribe or from your village or not because people excuse stealing when it comes from their own part of the world, and say it is ok after all it is my brother or sister but never forget that everybody, every public officer that steals money makes it very difficult for you to access good education, good health care, good roads, etc because public money is not for private pockets, it is meant for the public good, it is meant for public infrastructure. So, anybody pocketing public resources does harm to the country and the future and to all of the young people in our country.”

He, therefore, called on the Nigerian youths to join in the fight against corruption, pointing out that they are significant players in the nation’s developmental process.

“So, I want to say to the young people here in particular that you represent the army that must fight corruption, not because it seems like a nice thing to do, no, because your future depends on it.

“The reputation of your country is all that you will have in the next few years. Whatever you want to do, it is that reputation and those who destroy the reputation of the country are not doing you good. They are doing you a great evil. You must ensure that you join the army to fight corruption, to fight dishonesty because it is simply dangerous. Not just for you but for the entire society and for the future”, he said.

On his part, the Executive Chairman, EFCC, Abdurasheed Bawa, during his remarks said it was imperative for school children to get acquainted with issues concerning economic and financial crimes.

He added that the Integrity Club and Zero Tolerance Club Manuals would not only imbue a culture of integrity in the formative years of youths and children but would expose them to the need for honesty, transparency and accountability in their dealings.

He said: “The choice of school children and youths as torch-bearers in this important crusade is informed by the fact that they are not ely vulnerable to the effects of economic and financial crimes but retain the potential of breaking with the past years of decadence, to deliver the much cherished destiny of our nation as a corrupt-free society.

“Consequently, we have designed programmes and activities aimed at nurturing a culture of integrity in the formative years of this young population. Two of such programmes are the EFCC Integrity Club for primary schools and the Zero Tolerance Club for tertiary institutions.

“The Clubs are designed not only to improve children and youth understanding and sensitivity to the issues of economic and financial crimes but as a deliberate intervention to imbue them with values which underpin integrity, honesty, transparency and accountability to influence their behavior and character formation.

“Some of the activities through which we have sought to achieve this value orientation include but are not limited to the following rules: plays, visual arts, creative writing, poetry, games, dramas, lectures, workshops, music shows, road walks, etc.”

He, however, called for partnership with States Education Boards by mandating all the schools under their supervision to establish EFCC integrity clubs.

He extended partnership calls to Vice Chancellors, Rectors and Provosts of Universities, Polytechnic and Colleges of Education across the country.