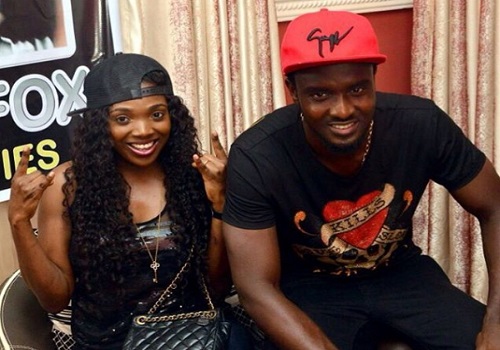 Annie Idibia’s eldest brother, Wisdom Macaulay, has accused her of shortchanging him after introducing him to hard drugs.

In a video on his Instagram page, the father of three accused his younger sister of exploiting him without due remuneration.

He alleged Annie told him off for failing to show up after two weeks of being away to sort out some family issues.

He appealed to Nigerians to rescue him for the alleged exploitation his sister has subjected him to.

He said: “Hello, Nigerians. My name is Wisdom Macaulay, I am the elder brother of Annie Macaulay Idibia. I’m crying out for help at this moment because my life is being threatened.

“I have been working with my sister for some time but she would never pay me my dues. She would rather send me N20,000 or N30,000…turn me to her slave and at the end of the day, she can decide to end it when she is angry.

“Some weeks back, her husband sent me some money that I have begging him for years. The money wasn’t so much but I used it to settle my home. I have a wife from Imo State. I am sorry that I’ve not come to do the rightful thing to pay your daughter’s dowry. It’s not because I don’t want to, it’s because I’ve been manipulated for many years.”

Accusing his sister of having introduced him to drugs, Macaulay said: “Annie introduced me to drugs, hard drugs, Annie takes drugs, she is a drug addict. She takes it every day, she is so violent.

“And it’s the same way she doesn’t have peace with anybody. She quarrels with everybody, she fights everybody. I defended her because I love her as a sister but I now realised she doesn’t even have love or any good intentions for me.”

Explaining how Annie eventually sent him away, he said: “I wasn’t around for 2 weeks because I had my own issues. And when I came back, begging my sister with the work and everything. She decided to take everything from me. She took away the job.

“She wouldn’t give me a car. I have been begging my sister for a car to do Uber for many years now. So that I can on my own provide for my wife and three children. My sister has never responded to me.

“I came back to beg her for the manager job she had offered me but she rather turned me to her errand boy, she turned me to a slave. Annie is evil. She doesn’t want me to stand on her own.

“I’ve been begging Annie for an opportunity to stand on my own but she will not give me a chance. Every slight opportunity, she calls my wife and insults her. She insults everybody. She is violent.”

Stressing on how he got hooked on drugs, Macaulay said: “Every night she’s on drugs, everyday she’s on drugs. Even as she’s seeing this now, she knows that I am saying the truth, that she’s ordering for crack. She introduced me to it. I was never like this. And sometimes the thing gets into my head.

“I felt as a sister, she had good intentions for me. If you go back to my previous pictures, this is not how I looked. This is not who I am. At the end of the day, she took away the only opportunity for me to be able to feed my own family from me because she doesn’t want me to stand on my own…”

Annie Idibia is yet to respond to the allegations that have gone viral.